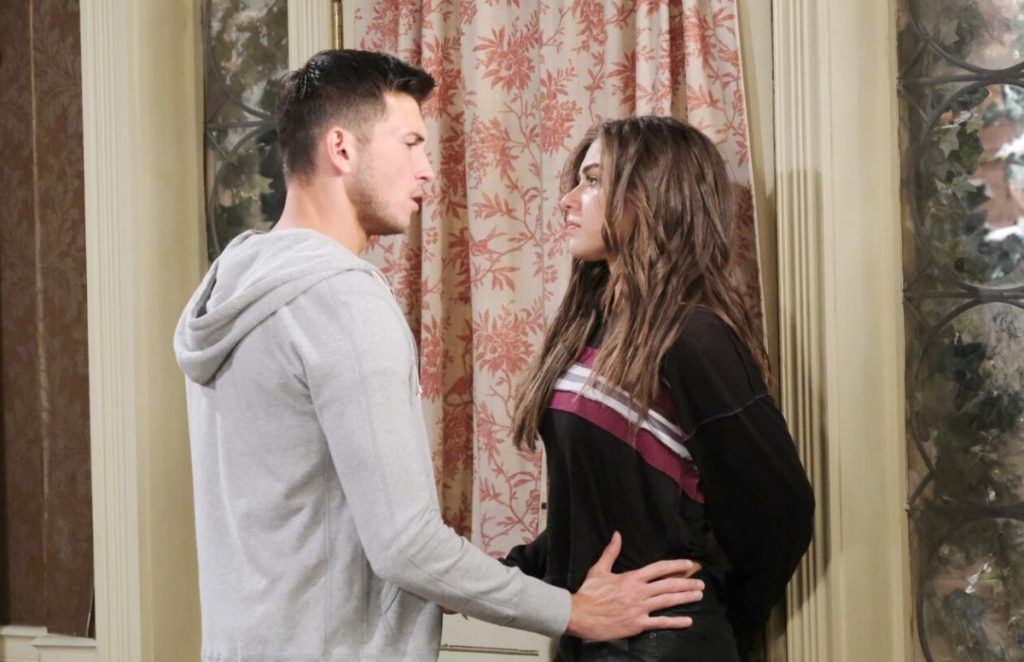 Days of Our Lives spoilers tease that Ciara Brady (Victoria Konefal) will share her theory about Jordan Ridgeway’s (Chrishell Stause) killer with Ben Weston (Robert Scott Wilson) in an upcoming episode of Days of Our Lives!

Ciara thinks baby David Ridgeway’s (Caleb and Kyler Ends) birth father may have come looking for Jordan, possibly because in California she may not have had custody and he was the custodial father – therefore Jordan would have been guilty of child-snatching!

Days of Our Lives viewers will recall that Jordan sent Detective Rafe Hernandez (Galen Gering) to California to bring her baby boy back from a friend who was caring for him – she never revealed who the birth father was or what the custody arrangement was. The birth father may not have even known she was pregnant and found out he had a child with her later on and tracked her to Salem, there could have been a confrontation and he could have killed her, using the scarf to strangle her as a weapon of convenience!

Ben should also recall that the day of the strangulation there had been a break-in at the gatehouse – there was a broken window. Ben had Detective Rafe Hernandez (Galen Gering) come out and make a report but there didn’t seem to be anything missing or disturbed inside – could there still be a police report somewhere that could at least shed some doubt on Ben’s guilt?

The only problem is now, who’s going to look for it now that Ben and Ciara are both on the run? How is Ciara going to find anything that can help Ben? But if they are on the run, who would be able to request it? Ciara doesn’t even know her big brother is in town trying to help with their mother, so she’s just kind of on her own! Poor Rafe and Shawn Brady (Brandon Beemer) both with lawbreaking sisters!

Days of Our Lives Spoilers: Rafe And Justin Try To Track Down Kayla https://t.co/l4f5WQlSbz pic.twitter.com/WGwp9odsSY

Days of Our Lives Spoilers – Ben Weston Thinks It’s A Reasonable Theory, But Who Can Search It Out?

Ben thinks it’s a reasonable theory, but who can search it out and investigate it that won’t turn him and Ciara in? It might be the very last person that either Ciara or Ben would want to turn to, but since she’s got something on them, maybe Xander Kiriakis (Paul Telfer) and Victor Kiriakis (John Aniston) might be someone she could call with her theory to see if they can find anything concrete.

Ciara already told Will Horton (Chandler Massey) that he is innocent and that Xander and Victor framed him to protect Maggie Kiriakis (Suzanne Rogers) but they don’t know that – but Victor confessed that to her himself. It’s really not anything she could still use as any kind of leverage, it would be more like asking a favor – a BIG favor. However, one or both of them may be inclined to help, especially Victor, who certainly doesn’t want his granddaughter on the run with a fugitive!