Days Of Our Lives Spoilers and Rumors: Chad Drugged Abby To Get Rid Of Gabi 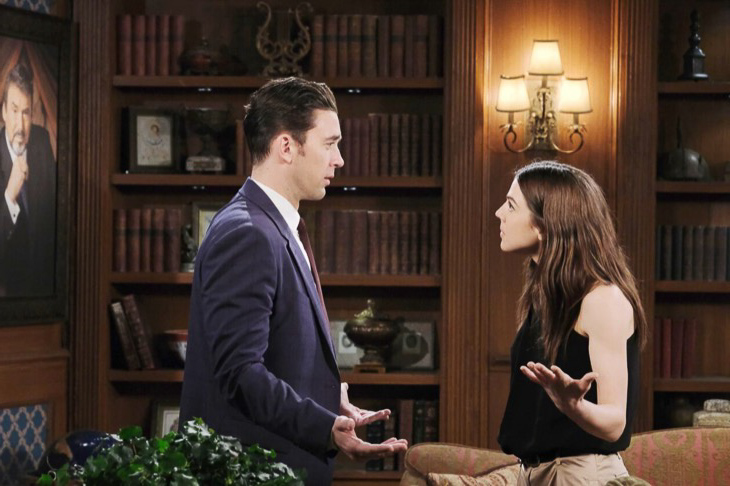 NBC Days of Our Lives spoilers and rumors reveal Chad Dimera (Billy Flynn) is acting very strange since his return to Salem. Chad also claims that Abby Dimera (Kate Mansi) wants nothing to do with him. Could Chad be responsible for drugging his wife?

Days of Our Lives Chad was brainwashed before Abby was drugged. Abby began to act strangely right after Chad’s brainwashing was broken. Could Chad have drugged Abby before she broke through Stefano Dimera/Steve Johnson’s (Stephen Nichols) spell? After all, Chad was determined to do what his “father” asked. Since Abby wasn’t complying with Stefano’s demands, it makes perfect sense that Chad would coerce her in any manner necessary.

Days Of Our Lives Updates – Chad DiMera Had Means And Motive

Days of Our Lives Chad helped cover up Marlena Evans’ (Deidre Hall) kidnapping so that Stefano could marry her. Chad tried to kill Kate Dimera (Lauren Koslow) and Gabi Dimera (Camila Banus) why would Abby be any different? Chad didn’t acknowledge his bond to Abby when he was under Stefano’s spell. Chad could have been given orders to kill Abby and would have blindly done so, drugging Abby would have been nothing to him. Chad lived in the same house as Abby. Chad had unlimited access to Abby. Chad could have drugged her in any way at any time. Chad could have felt that drugging Abby would keep her under control.

Days of Our Lives Chad is still acting strangely. Could Chad still be under Stephano’s influence? After all, Abby doesn’t seem to be getting any better and Chad is the one constant in all of this. Is Chad continuing to give her the drug while she is being treated at the clinic in Florida? Could this doctor be working with Chad to keep Abby having these delusions? If Chad is still drugging Abby, what does he have to gain from it?

Days of Our Lives Spoilers: Gwen Has A Secret Connection To Who In Salem?https://t.co/whC7oH5IP4

Days of Our Lives Chad wants Gabi away from Dimera Enterprises. Gabi has already been framed for drugging Abby but keeping Abby sick could work in Chad’s favor. Gabi cannot fight Chad for the company if she is in prison for drugging Abby. Chad could have made sure that Dr. Rolf (William Utay) framed Gabi to get the CEO job at Dimera from her. Now that Chad has the CEO job, he needs to have Gabi put away so she cannot fight for her spot back as CEO. If this is the case, then once Gabi is convicted, Chad can stop administering the drugs.

Will Abby figure out what Chad is doing and stop him from continuing to feed these drugs to her? Will Abby’s alters resurface to protect her from Chad?