Days of Our Lives Spoilers: Abigail Has A Terrifying Experience When She Thinks She Sees A Ghost 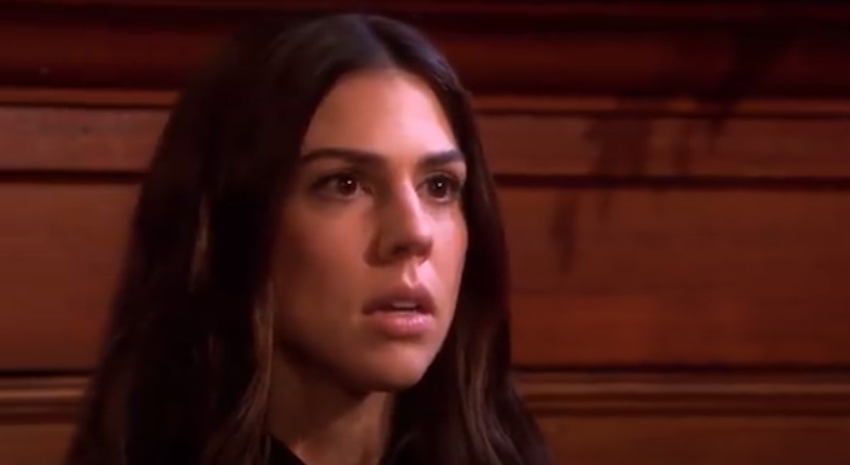 Days of Our Lives spoilers tease that Abigail DiMera (Kate Mansi) will have a terrifying experience when she thinks that she sees a ghost, in an upcoming episode of Days of Our Lives!

DOOL Spoilers: Abigail DiMera Does Have A Past With Mental Illness But Not With Post Traumatic Stress Disorder

Days of Our Lives viewers will recall that Abby does have a past with mental illness included, but it wasn’t post traumatic stress disorder, although that could have happened very easily considering everything she has been through. What Abby had was dissociative identity disorder, with two different personalities manifesting. But when she thought she saw Ben Weston (Robert Scott Wilson) coming at her with a necktie to strangle her, instead of Chad DiMera (Billy Flynn) her husband, that was very disturbing! Abby is indeed hallucinating – but when she has the terrifying experience of seeing a ghost, she’s not hallucinating, she’s just seeing a doppelgänger; a lookalike of someone from her past!

That someone she sees the doppelgänger of is more than likely Stefan DiMera (Brandon Barash)! Poor Jake Lambert (Brandon Barash) guesses he just has one of those faces, since everybody seems to recognize him except they have him mistaken for some dead guy! So far his new mechanic, Ben looked like he thought he’d seen a ghost and the dead guy’s widow fainted in front of him, but this Abby chick started screaming and he thought she was going to come after him and beat him to death with her purse or something! At least now he knows, after Ben has filled him in about Stefan DiMera, to shout out “I’m not Stefan DiMera, I’m Jake Lambert! Calm down!” Chances are, unless Jake has something to do with DiMera Enterprises, or she needs service on her car, she’ll probably see him around town like Gabi did!

Days of Our Lives Spoilers: Gabi DiMera Loses Her Mind Over ‘Jake’ – Will She Fall In Love With Him? https://t.co/gZzUOGA60t pic.twitter.com/RJDYiHLkGE

Days of Our Lives Spoilers: What? A Twin? A Rubber Mask? What?

Abby gets calmed down, but doesn’t quite know what to think – what? Is he a long lost twin of Stefan? Is he wearing a rubber mask like Kristen DiMera (Stacy Haiduk) did to impersonate Nicole Walker, (Arianne Zucker) as she and Chad had heard about after they came back from Paris? Is he another doppelgänger meant to impersonate Stefan? If she gets a chance to talk to Jake for a little while, she will find out he doesn’t know why he looks like Stefan DiMera either – and never heard of him before he came to Salem and found out he was the spitting image of a rather infamous character!

Knowing Abby, she will very soon have to know whether the Stefan twin could be related or not. He seems nice enough and even though he may be DiMera and never have known it, it would be like her to sneak a couple of hairs or a cup Jake has drank out of and something from Chad to compare DNA to see if maybe they are related – even though the memory of Stefan may not be so pleasant, maybe he was the evil twin and Jake is the good one! Her curiosity will get the better of her, and Jake’s might too, and Chad’s as well if she tells him or he doesn’t run into Stefan’s lookalike on his own!

Days of Our Lives Spoilers: Gabi DiMera Loses Her Mind Over ‘Jake’ – Will She Fall In Love With Him?