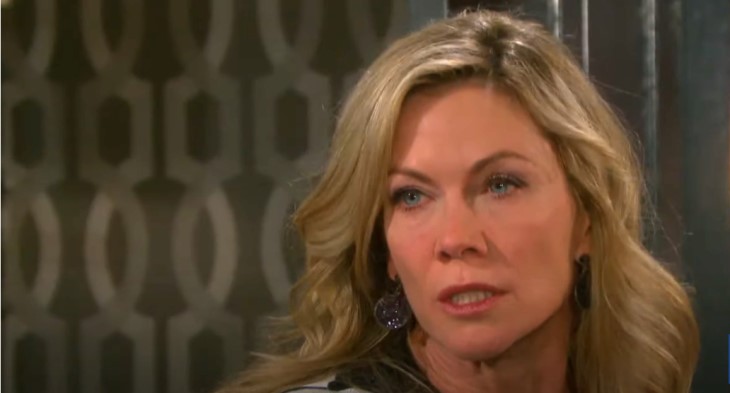 Days of our Lives (DOOL) spoilers tease that Brady Black (Eric Martsolf) has reason to worry that Kristen DiMera (Stacey Haiduk) hasn’t put her violent past behind her.

Kristen has made a point of turning over a new leaf. She has seemingly been on the straight and narrow ever since she believed her baby died. When that happened, Kristen fled Salem and joined the convent. She was just about ready to take her vows when she and Lani Price (Sal Stowers) decided to return to Salem instead.

Kristen is the DiMera most like her adopted father, Stefano DiMera (the late Joe Mascolo) . She has been ruthless in her quest for power and love. She hired Xander Cook (Paul Telfer) to kill Marlena Evans (Deidre Hall) at her wedding to John Black (Drake Hogestyn).

She also impersonated Nicole Walker (Arianna Zucker) in order to get Brady back into her bed. Kristen’s schemes always failed, but she always created chaos wherever she went. But after she accidentally caused the death of Haley Chin (Thia Megia), she seemingly tried to become a better person.

As viewers know, Kristen’s baby is actually alive. Xander and Victor Kiriakis (John Aniston) conspired to switch Sarah Horton’s (Linsey Godfrey) dead little girl with Kristen’s daughter. Kristen has spent almost a year believing her little girl to be dead. Finding out that Victor was responsible for her suffering all this time caused something in Kristen to snap. She stabbed Victor and left him for dead. Then she returned to Brady as if nothing had happened.

Days of Our Lives Spoilers – Does Kristen DiMera Remember What She Did?

It’s possible that Kristen has no memory of her actions. But it won’t take Brady long to realize what Kristen did. He’ll have to wonder if Kristen’s violent actions are really a thing of the past. Her actions toward Victor are understandable, considering what he did, but she can’t play judge, jury, and executioner. The law is there for a reason. When Rachel is finally returned to Kristen, can Brady trust her to care for their daughter or could she snap once again?

Days of Our Lives Spoilers: A New Romance Between Abe And Kate Might Be In The Works – True Love Or Manipulation? https://t.co/BRnlN4f28C pic.twitter.com/WCS1Greygw

Has Kristen truly reformed? Were her actions toward Victor justified? Does Brady have reason to be concerned? Only time will tell, so stay tuned to Days of Our Lives airing weekdays on NBC. And don’t forget to check back here regularly for all your Days of Our Lives news, information, and spoilers!