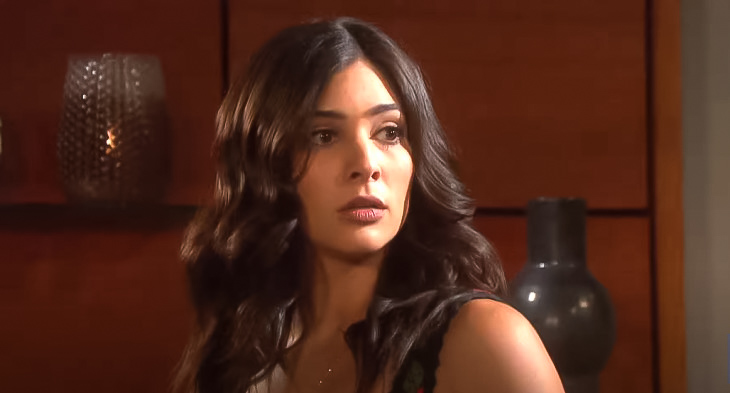 NBC Days of Our Lives spoilers say that while Gabi DiMera (Camila Banus) might be gone right now, that doesn’t mean she will be gone forever.

As a matter of fact, DOOL spoilers tease that Stefan DiMera’s (Brandon Barash) will be back sooner rather than later, and when she does come back, she will certainly get her revenge on all of those who have done her wrong. With that said, here are three things that fans can expect from this feisty but beautiful Latina when she returns back home.

#1 She Needs To Choose Between Jake And Stefan

We certainly don’t blame Gabi DiMera that she is having such a hard time choosing between the two men in her life. Even though one is presumed to be dead, she still loves him, while the other one she certainly lusts over. It sure doesn’t help that these two men look like identical twins, right? When Gabi returns to Salem, she is going to be determined to find out the truth about them.

#2 She Is Going To Make The Ultimate Power Move

If there’s one thing that we’ve learned about Gabi DiMera over the years, it’s that she’s someone who is not a quitter. She is going to climb that mountain until she reaches the top. Or in this case, she is not going to give up until she reaches the top of what is DiMera Enterprises. Watch this space as we have a feeling that Gabi is going to make the ultimate power move as Stefan DiMera’s widow, while also giving the rest of the DiMera Dynasty the shock they deserve.

There’s always the possibility that Gabi might return to Salem with a huge surprise in the form of a bump in the oven. The dilemma, of course, will be trying to figure out who the baby belongs to (as no one knows if Jake Lambert is who he says he is).

That and Gabi’s motherhood instinct might kick in hard enough for her to want to fight for her daughter, Ari as well. Either way, we have a feeling that Gabi will be coming back feisty and ready to fight more than ever before.