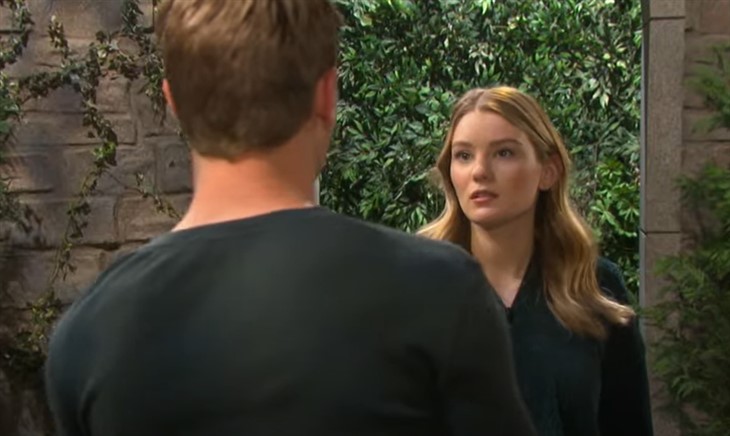 NBC Days of Our Lives spoilers reveal that Allie Horton (Lindsay Arnold) literally snuck around the globe and crept into Salem. Then, she disappeared without a trace, only to suddenly return without an explanation. Tripp Dalton (Lucas Adams) is doing the same thing, sneaking back into Salem with a cover story. Are they both running scared from the same dangerous man?

Days of Our Lives Spoilers – Allie Horton’s Many Secrets

DOOL spoilers reveal that ever since Allie came to Salem, she had hidden a lot of secrets from everyone. First, it was the pregnancy, which she was determined to keep from her mother, Sami Brady (Alison Sweeney). Then, it was the identity of the father. Over time, it became clear that Allie was likely not just hiding from her mother, but running from someone else.

When Allie first went missing, nobody could really trace her because she didn’t use her own cards to travel. She used the credit card belonging to her grandmother, Kate Roberts DiMera (Lauren Koslow). She just crept into Salem and popped up at Eric Brady (Greg Vaughan) and Nicole Walker Brady’s (Arianne Zucker) home unannounced.

She made it clear that she just needed a place to crash for a few days while she figured out her next move. So, that indicates that she was scared of something or someone, and we don’t think it was Sami.

Days of Our Lives spoilers reveal that now we have Tripp back in Salem. Like Allie, he didn’t give anyone a clue that he was coming back home. He arrived without telling anyone and snuck into Steve “Patch” Johnson (Stephen Nichols) and Dr. Kayla Brady’s (Mary Beth Evans) home. He came up with a story that he wanted to spend his last year at medical school in Salem.

But why make the decision without letting anyone know? Did he prepare the school transfer ahead of time? What about the tuition, grants, scholarships, or student loans that were attached to his former medical school? Something just doesn’t seem right.

Days Of Our Lives Spoilers: Marlena Warns Claire About Jan, But Is It Too Late? https://t.co/cuhZ0Jdqll pic.twitter.com/7XWC7eweQX

In the promo clip for next week, Allie and Tripp come face-to-face in Salem. Tripp looks stunned while Allie looks fearful. We know she can’t be scared of Tripp, but could that look mean something else? Perhaps they are both running scared from the same man and are in serious danger?

That might explain why Allie was so insistent on giving up her baby, to protect him. We will have to see how this storyline develops over the next few weeks.

Be sure to catch up on everything happening with DOOL right now. Come back here often for Days of Our Lives news and updates.