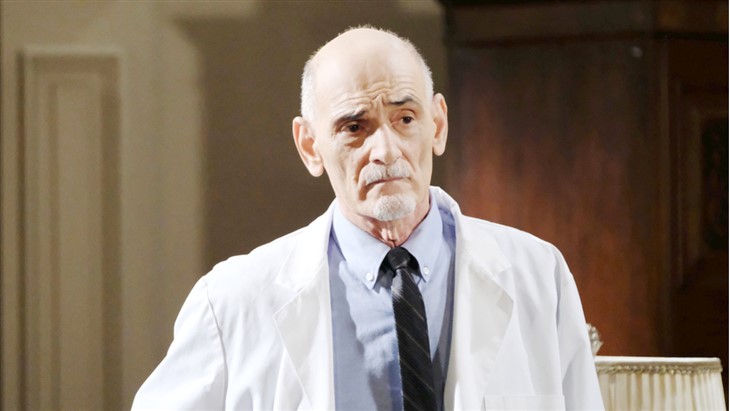 Days of Our Lives comings and goings reveal that we are once again going to see Dr. Wilhelm Rolf. Actor William Utay is returning to the NBC soap opera to play Salem’s mad scientist. Keep reading to find out the date he reappears and which surprising characters are part of his storyline.

Days Of Our Lives Spoilers – William Utay Is Coming Back

DOOL comings and goings confirm that Utay is reprising the role he has played on-and-off for several years. The actor will be back on-screen as Dr. Rolf, Salem’s mad scientist who was eternally devoted to Stefano DiMera (Joseph Mascolo).

According to Soap Opera Digest, Dr. Rolf will appear on our television screens on September 24, 2020. He will be shown in scenes with some unexpected and surprising characters. It will be interesting to find out his storyline and how it connects to the rest of the Salem residents.

Days Of Our Lives Spoilers -Interactions With Surprising Characters

Days of Our Lives comings and goings reveal that Dr. Rolf will be seen talking to Gwen Rizczech (Emily O’Brien). Now, this makes a bit of sense since we just discovered that she is the person who drugged Abigail DiMera (Marci Miller). After all, the substance was a hallucinogen being developed by DiMera Enterprises.

That is right up Dr. Rolf’s alley, but how does he know Gwen? Was her coming to Salem and getting into the DiMera mansion part of Dr. Rolf’s plan? Or does she have her own reasons for wanting to hurt Abigail?

DOOL Spoilers – Other Comings and Goings

Recently, we have seen the return of several Salemite, as well as watching a few of them leave town. Rafe Hernandez (Galen Gering) is coming back, as well as his sister, Gabi Hernandez DiMera (Camila Banus). We are also expecting to see JJ Deveraux (Casey Moss) and Ava Vitali (Tamara Braun). Former DA Melinda Trask (Laura Kai Chen) will also be arriving next week. In a promo clip, Melinda confronts Kristen DiMera (Stacy Haiduk) and wants justice for Haley Chen’s (Thia Megia) death.

Days Of Our Lives Comings and Goings: Sami Brady Leaves Salem, But Alison Sweeney Will Be Back #DOOL #DAYS #DAYSOFOURLIVEShttps://t.co/9vY8HxeR2D

What do you think is going to happen with Dr. Wilhelm Rolf and how is Gwen Rizczech connected to his story? What is their goal regarding Abigail DiMera and could other Salemites get caught in the crossfire? We will have to keep watching to find out how this story develops over the next few weeks.