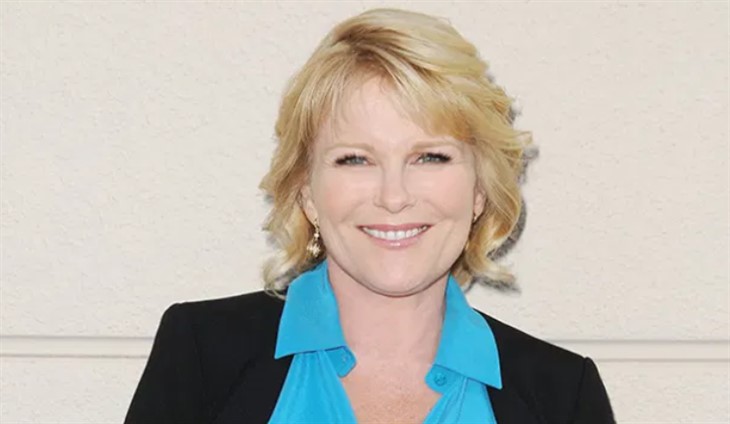 Days of Our Lives actress Judi Evans has played two characters on the NBC soap opera: Adrienne Kiriakis and Bonnie Lockhart. Sometimes, the soap star would play both characters at the same time! The latest news on the fan-favorite daytime actress is landing a role in a new movie. It is titled “Love Is On The Air” and is scheduled to be released in 2021.

There isn’t much information available yet, but we know the DOOL star will be playing Miriam Cassidy. The credit list from IMDB also reveals these actors have joined the project: Jason London, Lauren Harper, Terry Woodberry, Kevin Shewey, Kristina de Mora, Max Udell, and Christopher Cleveland.

According to Soap Opera News, “Love Is On The Air” is currently being filmed. It is due to be released next year. The film is directed by Arvin N. Berner, the script was written by Tommy Blaze and Sean Stencil serves as producer. It will be distributed by Pure Flix Entertainment.

Days Of Our Lives – Judi Evans’ Other Projects

The Days of Our Lives actress was first credited in 1985 with The Party Animal, then she landed a recurring role on Guiding Light, in which she played Beth Raines. Another World cast her in the role of Paulina Cory Carlino and she also is known for playing Maeve Stone in As The World Turns. Evans has also been in Getting Away With Murder: The JonBenet Ramsey Mystery, Healing Hands, Operation Cupcake, The Mentalist, Venice The Series, The Bay, I Am Not For Sale: The Fight To End Human Trafficking, and John Wynn’s Mirror Mirror.

DOOL Spoilers – Playing Dual Roles In Days of Our Lives

Evans plays dual roles in the NBC soap opera, but most of the time the two characters don’t appear at the same time. The exception was when head writer Ron Carlivati took over and spun a doppelganger story with Bonnie Lockhart/Adrienne Kiriakis and Dr. Marlena Evans/Hattie Adams (Deidre Hall).

Days Of Our Lives Spoilers: Tripp And Claire’s Romance – Ben’s Connection To Storyhttps://t.co/9gpC1Z9KiI

When the soap did a one-year time jump, Adrienne died in a car crash, which devastated viewers. The actress is a fan-favorite and her character is well-liked, as well. Even though Adrienne has passed away, Evans was brought back to play her alternate role. Now, Bonnie isn’t exactly everyone’s favorite person, but fans are thrilled that Evans is back. Judging by the recent episodes, it seems that we might see Bonnie’s redemption story, or at the very least, we will start to warm up to the troublemaker.