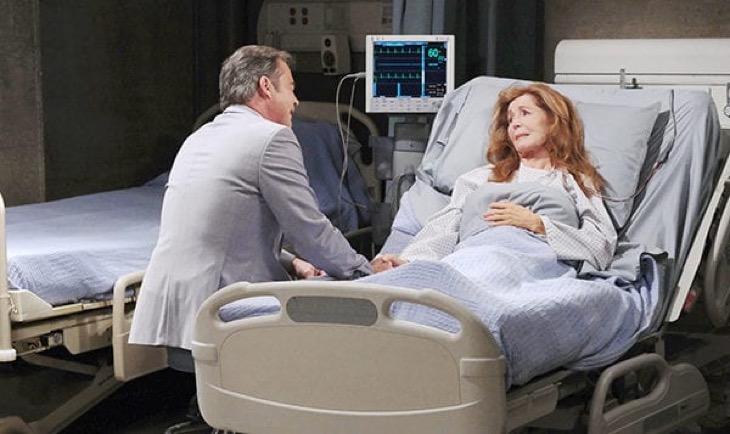 NBC Days of Our Lives spoilers and updates reveal that fans were shocked that the writers would have Maggie Horton Kiriakis (Suzanne Rogers) attempt suicide. It all played out on our TV screens. Maggie wrote goodbye letters to her husband and daughter. Then, she hung herself in the prison cell with her sheets. Rogers explained why Maggie took such desperate action.

DOOL spoilers reveal that Maggie is still in prison. She turned herself in after she had “memories” of causing the crash that killed Adrienne Kiriakis (Judi Evans). Of course, fans suspect that she isn’t really responsible for the accident at all. But until the truth comes out, she’s surviving in prison.

At least, until Xander Cook Kiraikis (Paul Telfer) decided that she needed to know another bombshell.

As fans saw this past week, Xander told Maggie that the accident killed Sarah Horton’s (Linsey Godfrey) baby. It was shocking for Maggie to hear, but then she realized that she was at fault. She was trying to cope with the realization that she killed her own granddaughter. That led her to make an extreme decision.

Days of Our Lives spoilers teased that Maggie would write goodbye letters to Victor Kiriakis (John Aniston) and Sarah. The letters were delivered, but then Victor sent Xander to the prison before Maggie killed herself. Fans watched in horror as Xander found Maggie irresponsible. He unwrapped the sheets from her neck and saved her life.

Days of Our Lives Spoilers: Suzanne Rogers on Extreme Decision

In the latest issue of Soap Opera Digest, Rogers was asked why Maggie would take such drastic action. Suicide really isn’t part of her character’s mindset. But then again, she was being delivered blow after blow. Rogers hinted that it was saving Sarah pain because every time she looked at her mother, she was probably going to be reminded of the baby’s death.

“Things got to such a point that Maggie was ready to leave all that she knew and loved to make it right for the world. With her there, she was a reminder of what she’d done and what she’d taken away from them.”

What do you think is going to happen next with Maggie? Will Orpheus (George DelHoyo) pay for those Mother’s Day deaths? Or will he somehow get away with his crimes once again? We will have to keep watching the NBC soap opera to find out.