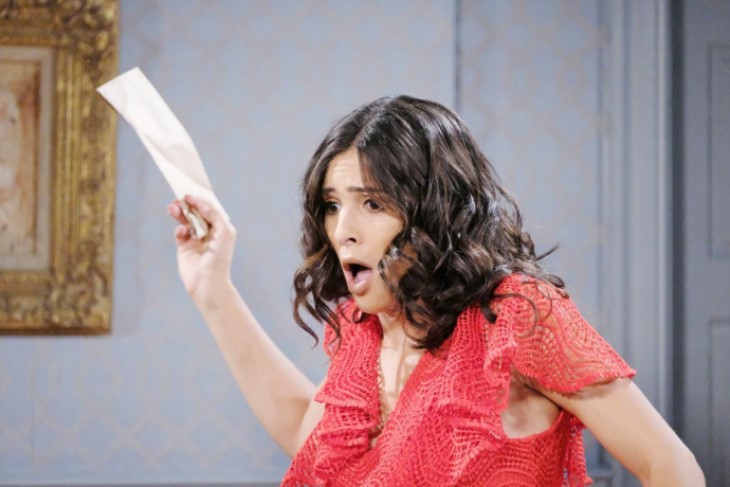 Days of Our Lives spoilers tease that Gabi Hernandez DiMera (Camila Banus) will spar with Tony DiMera (Thaao Penghlis) and Chad DiMera (Billy Flynn) as she battles for the DiMera CEO position in an upcoming episode of Days of Our Lives!

Days of Our Lives Spoilers – Gabi Hernandez DiMera Thinks She Still Has The Right To The CEO Position As Stefan O. DiMera’s Widow

Gabi thinks that she still has the right to the DIMera CEO position as the widow of Stefan O. DiMera (Brandon Barash), but that is not a valid argument when there is a male DiMera who wants to take the position – namely, Chad! Abigail DiMera (Kate Mansi) previously didn’t want her husband involved in his father’s company, but now since for all intents and purposes Stefano DiMera (Stephen Nichols) is dead, Chad having obtained the microchip that Kayla Brady (Mary Beth Evans) removed from Steve Johnson’s (Stephen Nichols) brain and he and Tony burning it, (the scene was cut, but Days of Our Lives producer and writer Ron Carlivati tweeted the script for the scene recently) Abby is all for Chad heading up DiMera!

Tony DiMera (Thaao Penghlis) had some interest – until Anna DiMera (Leann Hunley) gave him an ultimatum and forced him to choose between it and her! This situation is vastly different from when Stefan had recently died and Tony couldn’t take the position and it was between her, Kristen DiMera (Stacy Haiduk) and Kate Roberts (Lauren Koslow) who is Andre DiMera’s (Thaao Penghlis) widow.

As it turned out, Wei Shin (Michael Hagiwara) didn’t like Kate so well and she lost the job. Kristen was facing legal troubles and so Gabi was the default! Now, however, it will be Wei Shin’s son, Li Shin (Remington Hoffman) who will be the decision-maker and the one who Gabi will have to impress – as will Chad. Prior to Li’s arrival, however, Gabi will get into a huge argument with Chad and Tony, and it will likely be over her eligibility to fight for the position since a true DiMera, Chad, wants to be CEO!

Chad and Tony will “throw the book” at Gabi – mainly the book of bylaws put down by Stefano when he founded the company, as to who could and who could not be the CEO of DiMera. The only case for a widow of a DiMera to take the CEO position is if there is no legitimate DiMera heir, preferably a male, available to lead the company, although it can be declined, as Tony did, and leave the playing field open for a DiMera widow.

Days Of Our Lives #DOOL Spoilers: Brady Strikes Deal To Protect Kristen – But What Does Victor Want In Return?https://t.co/K2Pjmlf93U

Chad, and possibly Tony as well, will refute her position, and expose her criminal charges that were only dropped after she agreed to donate bone marrow to save a baby’s life! Gabi will come up with all kinds of arguments why she is eligible to be the CEO and why she is the best choice, but ultimately, it’s up to Li Shin!