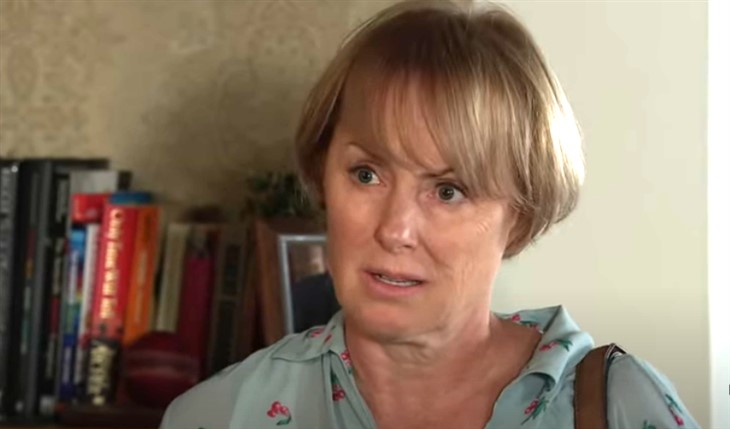 Coronation Street spoilers hint that Sally will try to expose Geoff by getting more evidence against him to help Yasmeen and expose his true nature. The walls are closing in on Geoff (Ian Bartholomew) and he knows it but things may turn in the favor of Yasmeen, Sally, and Alya in upcoming episodes.

Sally has been on team Yasmeen for a while and has been trying to help in any way that she can with her even giving Alya the wedding money so that she could buy Geoff out of Speed Dial. In upcoming episodes, she will find a new way to help Yasmeen out.

Sally was recently made aware of the camera that Geoff set up in the home that he shared with Yasmeen. This has turned up some red flags for her and she decides to do some detective work of her own in upcoming episodes. On the episode that aired Monday, viewers saw that Sally was able to steal Geoff’s laptop from his home in hopes of seeing what was on the cameras in the home. She is sure that the evidence that is on the camera or any evidence could show the true colors of Geoff including his abusive nature.

Sally finds this as a way to settle the argument between Geoff and Yasmeen by proving that Yasmeen was pushed to the edge by Geoff. This would show Tim the true colors of Geoff for once and for all. Viewers have seen that Tim has been questioning his father and been conflicted in recent episodes.

However, this could change if Sally is able to find something on the laptop to help with Yasmeen’s case, as it would also show Tim the true colors of his father. As of right now, viewers see that Tim is trying to play as neutral between Sally and Geoff. He wants to believe his dad but is having doubts.

Coronation Street Spoilers: Geoff Has Sally Trapped – Will She Escape With Laptop?https://t.co/2Hr16oXwaR

When Sally goes into the home about Geoff follows close behind and corners her. She went on to say that she was getting a book for Yasmeen. He went on to threaten her if she turned Tim against him. Be sure to tune in to catch up on everything happening with Corrie right now. Come back here often for Coronation Street spoilers, news, updates, and rumors!