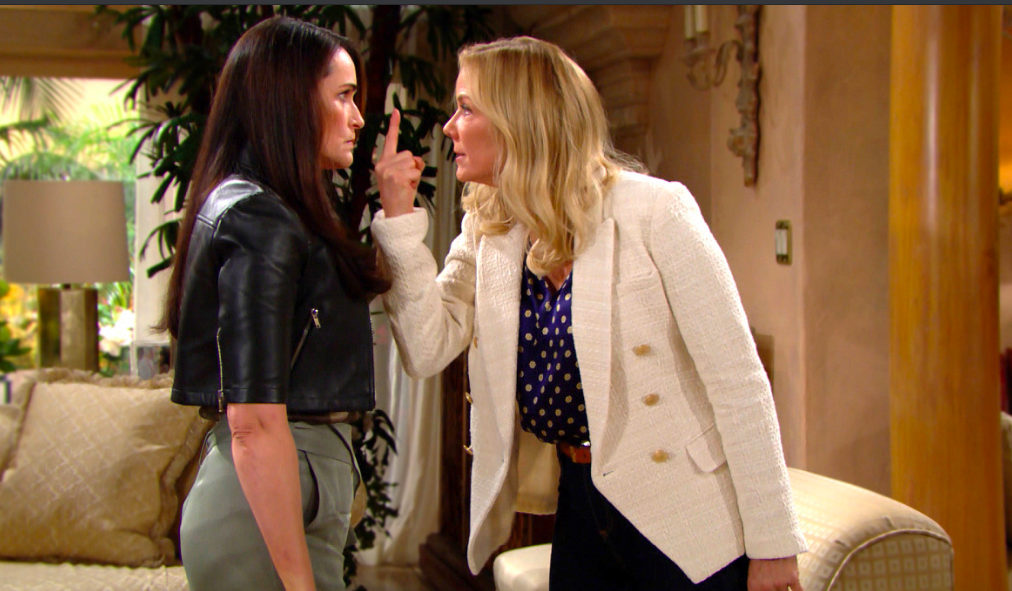 The Bold and the Beautiful spoilers reveal Brooke Logan Forrester (Katherine Kelly Lang) is blaming everyone but herself. Not only that, but she is raging and fuming at everyone who doesn’t take her side. Could she be losing her grip? Are we seeing a woman that is unraveling and becoming mentally unstable?

B&B spoilers indicate that Brooke is devastated over the state of her marriage to Ridge Forrester (Thorsten Kaye). She blames everyone except herself. It’s either Thomas Forrester (Matthew Atkinson), Shauna Fulton (Denise Richards) or someone else that is responsible. On Thursday’s episode, she even blamed Quinn Forrester (Rena Sofer).

Brooke went to ask Eric Forrester (John McCook) to evict Shauna. She is desperate to save her marriage and thinks it will be easier with Shauna out of the picture. However, she is really raging due to Ridge and Shauna’s kissing. It completely set her off and she is determined to get revenge, even though “Bridge” was separated at the time. Brooke even went as far as to slap Shauna across the face.

The Bold and the Beautiful spoilers reveal Brooke has added another enemy to her list. It is Eric’s wife and Shauna’s friend, Quinn. Now, the two women haven’t had a good history. However, things have been neutral and civil lately.

That gets thrown to the side when Brooke rages at Eric, Shauna and Quinn. She even demands that Eric dump his wife and if he doesn’t, then it is a betrayal toward her.

The Bold and the Beautiful Spoilers: Mental Instability Hinted

It is suggested that Brooke might be unraveling. Teetering over the edge, could she become mentally unstable? She loves to use that term with Thomas and others, but she can’t seem to grasp how crazy she is acting. Even Eric offered to get her some water to calm her down, which infuriated Brooke even more.

Just how far will Brooke go to get revenge on everyone who doesn’t take her side? Could she lose her grip on reality as the weeks go by? Fans will have to wait and see how this storyline develops.

Be sure to tune in to catch up on everything happening with B&B spoilers right now. Come back here often for The Bold and the Beautiful spoilers, news, updates and rumors!