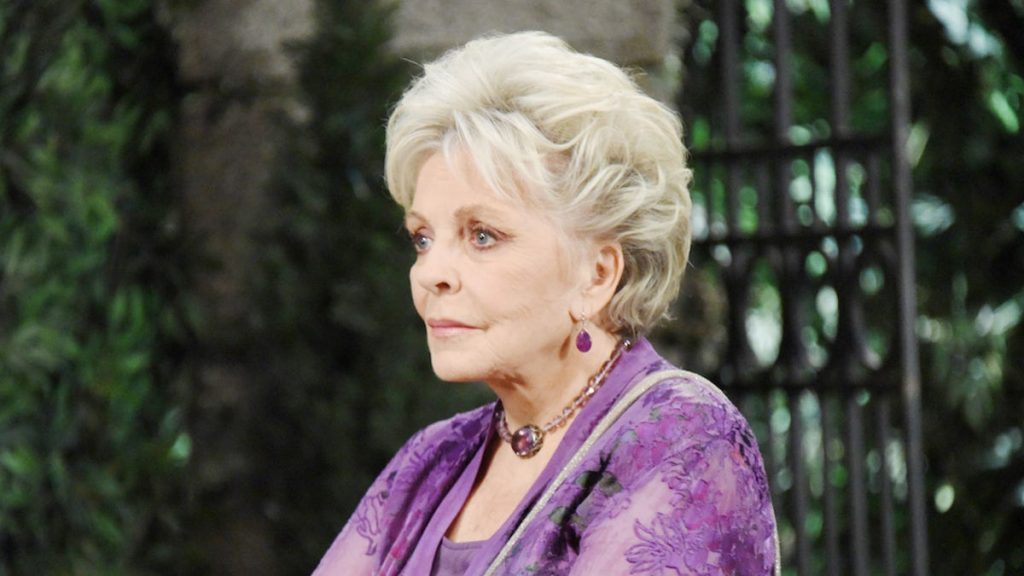 Days of Our Lives spoilers tease that when Julie Williams (Susan Seaforth Hayes) was getting a test on her pacemaker function, Dr. Kayla Brady (Mary Beth Evans) found an abnormality; if she has to have a new one, does it mean that Gabi Hernandez DiMera’s (Camila Banus) app won’t work on it?

DOOL Spoilers: It Does Appear That The Pacemaker And The App Are Paired Together

It does appear that Julie’s pacemaker and Gabi’s phone app are paired together, because Gabi got alerts from the app on her phone about radio waves being detected when Kayla was checking the pacemaker with an apparatus that read the functions and how fast it was beating.

It also appears that the app drains feeds off the electricity in the pacemaker, because while the pacemaker was working correctly, Kayla found an abnormality – that the battery was being drained much more quickly than it should be – Kayla said they usually don’t run down for five years! Gabi had a close call when her brother, Detective Rafe Hernandez (Galen Gering) noticed an alarm come on her phone from the pacemaker test being run, and remarked that was one weird app!

Days Of Our Lives Spoilers: Will Julie Have To Have A Whole New Pacemaker?

Most likely Julie will have to have a new pacemaker installed and she will be told it will be done out of an abundance of caution. There are real-life instances of batteries prematurely draining in pacemakers, and in May 2019 the Food and Drug Administration issued an alert: “May 07, 2019: The US Food and Drug Administration is issuing a safety communication informing patients and health professionals about the potential for premature battery depletion with (brand name redacted) implantable pacemakers or cardiac resynchronization therapy pacemakers (CRT-P).

To date, there have been three medical reports where the Medtronic pacemaker or CRT-P battery fully drained because of damage to the device’s capacitor. One patient died as a result of the damaged device and another patient experienced dizziness in follow-up that led to device replacement. If a capacitor in an implanted pacemaker or CRT-P is cracked, it can create an electric short, which can cause a battery to drain earlier than expected, according to the FDA.

If the battery is completely drained, the device will no longer deliver pacing therapy. The patients who rely heavily on pacing or who are pacemaker dependent may be most at risk for having an adverse outcome. With all three medical device reports, the battery depletion occurred within 7 months of implantation. The pacemaker and CRT-P devices are powered by lithium-ion batteries, the key component of which is the capacitor that stores electrical energy. The pacemakers are designed to last anywhere between 6 and 15 years, depending on the device and type of pacing, before a battery replacement is required.”

Days of Our Lives #DOOL Spoilers And Rumors: Ciara And Ben Go On The Run?! @celebratesoaps https://t.co/yIB60xONFO

DOOL Spoilers: Kayla Brady Doesn’t Know What Is Draining The Battery So The Pacemaker Will Be Replaced

Neither Kayla nor any other medical professional would be able to tell if the battery drainage is caused by a cracked capacitor or damage of some other sort to the pacemaker without removing and inspecting it, so it is almost inevitable that Julie will need a new pacemaker – one that won’t work with Gabi’s app.

The only problem is the alerts; the phone will alert her that someone is trying to mess with the pacemaker and then she could turn up the pacemaker speed and she could kill Julie! If the pacemaker is removed and left turned on as the new one is installed – which will need to be quickly, so Julie does not die from the beats missed, perhaps the app will not alert – and if it does not, then the app won’t work with the new pacemaker!