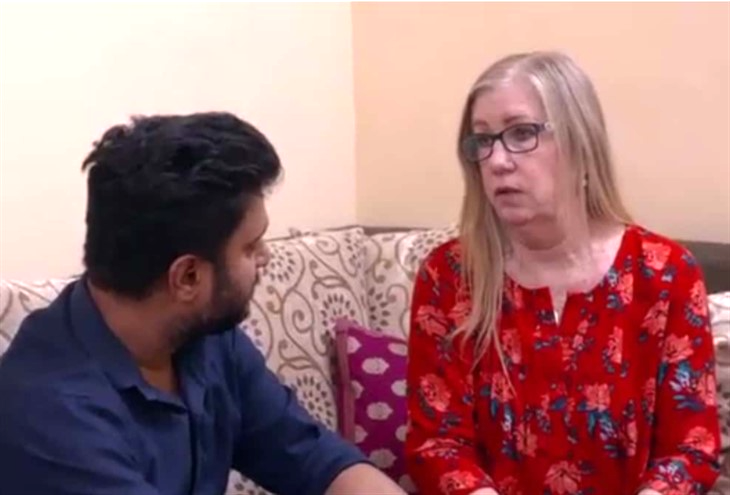 TLC’s “90 Day Fiancé-The Other Way” stars Jenny Slatten has drawn some criticism concerning her narrative about staying with Sumit Singh’s parents on her 2013 trip to India. Now, since his parents, Sahna and Anil Singh were on the show talking about her stay, some fans believe she lied about her visit. They felt that that was worse than Sumit’s lying about his marriage. Sumit is now coming out with the true story and defending his lady love!

Viewers will recall that Sumit has been stuck in the middle since day one! His parents, Amit and Sahna Singh have never approved of Jenny. Since hearing their side of the story, Jenny lost some fans who believed the Singhs over her. With the show set to resume on October 11, Sumit wants to set the story straight. He feels that the way TLC edited the portion with his parents it is misleading.

He admits freely that when he and Jenny first got together on Facebook he was catfishing her. Nevertheless, the 61-year-old Jenny and the 30-year-old Sumit fell in love online. They have now been in a relationship since 2012, making it eight long years waiting to be able to marry! Anil and Sahna said that when she came to India in 2013 she told them she was a Facebook friend of Sumit’s. She was supposed to stay only a few days and instead stayed a few months!

Once they figured out the two were more than friends, they objected to their considerable age difference. They also objected to Sumit cheating on his arranged-marriage fianceé with Jenny. They immediately forced him into the arranged marriage which has proven difficult for him to get out of. The divorce procedures have taken literally years!

Sumit had a difficult time breaking the news of the arranged marriage to Jenny. However, once she heard the whole story and how he was forced into it she’s stayed with him. Fans wondered why Jenny hasn’t talked about her 2013 trip on the show! The couple has rather conspicuously avoided social media posts since the mid-season finale of “90 Day Fiancé-The Other Way” wrapped.

Sumit however recently uploaded a selfie to Instagram that looked like Jenny was wearing an engagement ring! He thought they were talking about a ring he was wearing. She had bought a ring for him in a special episode but they didn’t show the scene on TV. He also revealed that when Jenny made her casting video, she did say that she had stayed at his house for four months in 2013. A fan wanted to know why she didn’t say anything previously.

Sumit answered that she had but it was only released on the TLC app and not on television. Many viewers only watch on TV and either don’t want to watch TLC on their smartphones or are not aware of the Internet website.

'90 Day Fiance – Happily Ever After': Larissa Confirms She Is Beyond Done With The Franchise! #90DayFiance https://t.co/w4Rcr6JARw

Sumit says because of this, the misunderstanding is really not Jenny’s fault. Sumit is concerned about the editing out of Jenny’s 2013 visit and the misunderstandings it caused. Sumit screams at his parents in a preview of the upcoming episode and tells TLC cameras he’s willing to fight for Jenny! But if that is an engagement ring on Jenny’s finger in that Instagram selfie, the couple might already be well on their way to their happily ever after!

Stay tuned to “90 Day Fiancé-The Other Way” on TLC, and keep checking here frequently for all the latest news, updates, and developments!