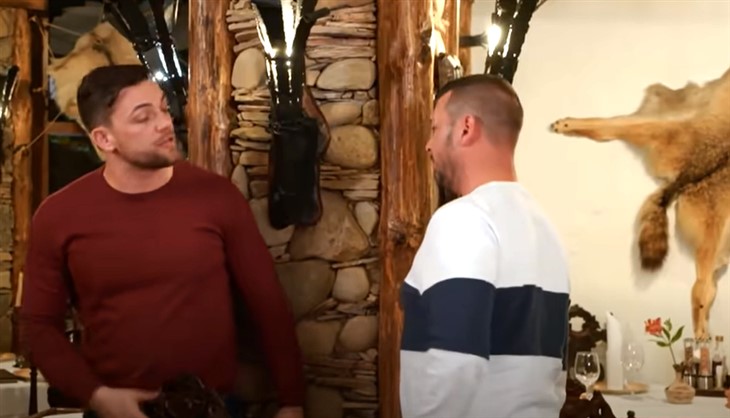 TLC’s “90 Day Fiancé-Happily Ever” fans may have thought that the drama was mostly over for the Castravets. In the season finale, Andrei Castravet told his bride Elizabeth Potthast Castravet that he and her father, Chuck Potthast had made peace. But now the Potthasts have ganged upon him in the tell-all, calling him mean and aggressive!

Elizabeth had been relieved when Andrei told her he’d apologized and made peace with her dad. But he hadn’t been able to sway Charlie or Jenn. In the tell-all, Jenn calls Andrei aggressive and cold-hearted. Charlie, of course, is Charlie, and he gets aggressive and means himself when he’s had too much to drink!

Fans wondered if Chuck would now become a mediator between Andrei and his grown children. But it doesn’t look like that has been the case! Chuck, Charlie, and Jenn are all on the tell-all, along with Elizabeth and Andrei. Due to COVID restrictions, this tell-all had to be done over “Zoom” or a similar platform. The show’s host, Shaun Robinson asks Andrei for an update on family relations. Andrei tells her he’s not going to keep grudges right now. Then Shaun asks the in-laws if they think Andrei’s behavior has improved. Jenn immediately jumps in with a no!

Shaun asks for a list of things that need improvement. She says he’s aggressive, cold-hearted, and implies he’s selfish and doesn’t care about Elizabeth’s family. Elizabeth is asked if she agrees, she takes a deep breath and admits he can be. She adds there is no excuse for it. Jenn smiles and Andrei seems a bit disappointed.

Chuck chimes in and asks Andrei if he agrees with Jenn’s assessment of him. Andrei still refuses to take any sole responsibility for what happened in Moldova. However, he kept his cool. As far as the fans’ impressions, they are mainly on board with Andrei.

’90 Day Fiance’: Varya Malina Reportedly In The US, Have She And Geoffrey Paschal Reunited? https://t.co/graNXe0PIW pic.twitter.com/HkrXPnKIUz

One said Elizabeth’s family is problematic, that they are the selfish ones. That fan described them as having an extreme sense of self-entitlement! Another was offended at how they acted in Moldova. The fan said if they act the way they do in America as they did in Moldova, he or she would be aggressive as well. That fan described them as rude, uneducated, and stupid.

One has to admit that those who describe them as rude have a very good point. They were guests in a foreign country and did nothing but complain. They challenged Andrei in front of his family and friends. They interrogated his friend Marcel behind Andrei’s back. They turned up their noses at the food.

Charlie in particular was an embarrassment, especially when he was drunk. He tried to take on Andrei in a fistfight at a nice restaurant. He did the same at their wedding reception! Charlie also ranted at and insulted Andrei when he was supposed to be making a toast! Chuck was even embarrassed by Charlie at that time! Many viewers think it is the Potthasts that need to improve their behavior, not Andrei!

Stay tuned to “90 Day Fiancé-Happily Ever After” on TLC, and keep checking here for all the latest news, updates, and gossip on all your fave “90 Day Fiancé” shows and stars!