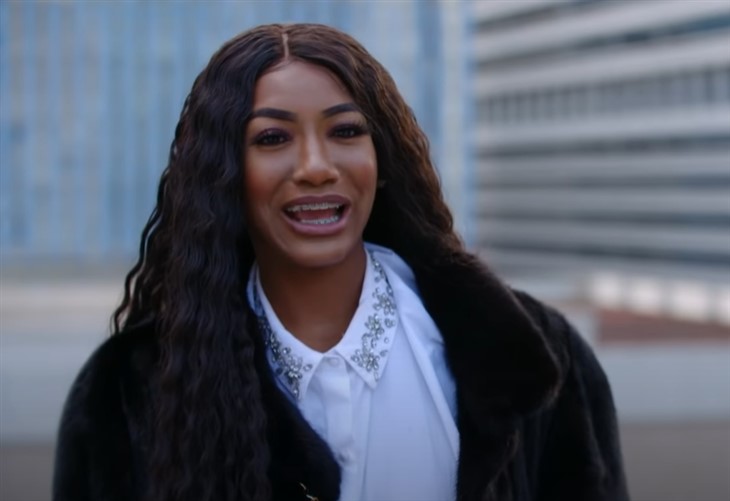 TLC’s “90 Day Fiancé-The Other Way” star Brittany Banks’ trip to Chicago to obtain her divorce didn’t go the way she planned in the latest episode of the show. She has to file all over again!

Brittany and her mother Audrey are on the way to court, driving in Chicago traffic. Brittany tells Audrey she is really nervous and hopes she walks in and the judge gives her the divorce right away. She talks about having been married too long and trying to move on with her life as a truck passes them on the road.

Audrey tells her daughter she’ll just be glad when everything is over with and Brittany can just move on with her life. Brittany says she will be glad too. Brittany then talks to the TLC cameras, saying that she’s very nervous and anxious about her court date – and that she literally has no idea how it is going to go. Mother and daughter pull into a parking deck and get ready to go into the courthouse.

Audrey tells Brittany to get her paperwork and everything ready. Brittany says she feels really bad that she has been keeping this secret, that her divorce is not final. She is not sure when she is going to tell Yazan Abu Hurira, her fiancé back in Jordan about the situation. She has never told him or his family that she is legally still married!

Brittany hadn’t even told Yazan the whole reason for her trip to Chicago. She did tell part of it, which was true, that her sister had a baby and she wanted to see them. But Yazan knows nothing about the divorce court date, let alone his family. Three hours later Brittany and Audrey emerge from the courthouse, Brittany carrying two or three large manila envelopes stuffed with paperwork. She tells the TLC camera that she is still married! She is appalled, and shocked, especially since she came all the way from Jordan to finalize her divorce!

She had been given a court date, but in spite of that her case was never called and she went to check with a court officer. The court officer went and looked in the computer, and the case had not been uploaded to the clerk’s office! There was no petition for divorce in their system in spite of Brittany’s having been contacted to show up for court! That was definitely not the outcome she was expecting!

Now she has to refile her divorce case, all of it has to be approved by a judge, and she will have to be in the United States longer than she expected to! She has no idea what she will tell Yazan, considering that she has stalled him and his family on the marriage for so long already!

She goes into a bit of a rant, telling her mother no wonder it takes forty-five years for people to get divorced in Chicago! She says people get paid to sit in the courthouse and not do their jobs! Whose head can she go over to get this divorce expedited? She is nearly in tears as she tells her mom she doesn’t know how she is going to stall Yazan and his family any longer! Audrey is worried about what his parents will think. So is Brittany. She tells the TLC cameras that this delay in her divorce brings with it many problems.

Both Yazan and his family will wonder why it is taking so long for her to marry Yazan. Audrey asks her why can’t she just tell them the truth? She tells her his family can’t know the truth. Audrey says she’ll have to come up with something! Brittany tells the TLC cameras again she doesn’t know how she’s going to continue stalling to Yazan and his family!