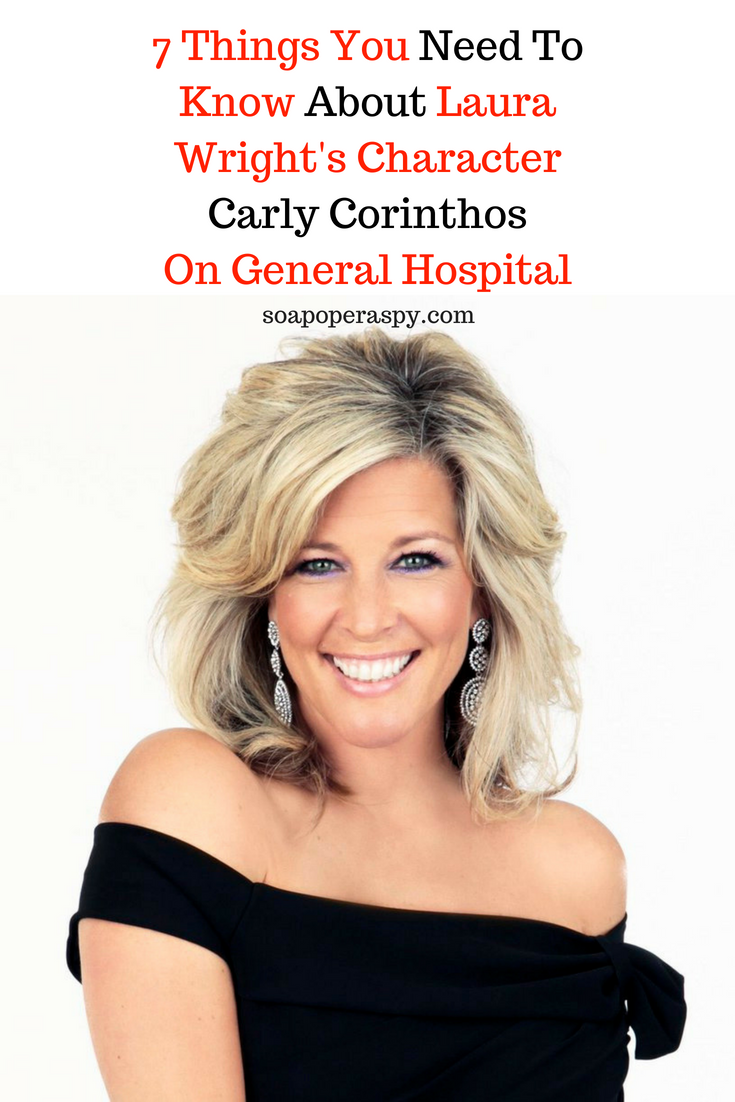 So what are 7 things you need to know about what makes Carly Corinthos (Laura Wright), who she is, and how did this former bad girl become one of the most important and influential characters on GH today?

Laura Wright Hair Tips – How To Get Hair Like GH’s Carly Corinthos!

[fvplayer src=”https://www.youtube.com/watch?v=L9M2ChTFGjM” splash=”https://sos-wp-media.s3.amazonaws.com/wp-content/uploads/2018/05/LW-Promo.jpg” width=”730″ height=”400″]Let’s check out Hannah’s character traits and see if you agree with our thoughts!

1. Carly Corinthos Is Good At Being Bad

Carly came to town to get revenge on her mother for giving her away when she was born. She felt abandoned and betrayed and wanted someone to pay.

I believe this trait helps her to keep her family and friends safe. Yet Carly Corinthos (Laura Wright) has issues holding onto her own happiness still.

2. Laura Wright’s Character Loves With All She Has On General Hospital

Carly can be overbearing and downright annoying to anyone she loves on the ABC soap. She believes she knows what her friends and family need and how to get it for them, and tries to do so, whether they want her help or not.

Let’s take Carly’s friend Jason for example, he fell in love with Sam McCall while helping her years ago but Carly didn’t approve. Carly tries to buy Sam off, run her out of town, reunite Jason Morgan (Steve Burton) with an ex-wife etc. just to get Sam out of his life.

Eventually, Carly and Sam McCall (Kelly Monaco) became friends and she even helped reunite Sam and Jason Morgan whether they agreed with her tactics or not.

Usually, Carly can spot trouble a mile away on General Hospital and knows how to deal with it. Carly doesn’t let people mess with her head at all.

It might have taken her a while to catch on but Carly finally figured out who has been haunting her for months, the problem is, she might have met her match in her son Michael Corinthos’ (Chad Duell) ex, Nelle Benson (Chloe Lanier), who coincidentally is her adopted father’s daughter.

Carly may be down at the moment but I wouldn’t count her out just yet. Carly trusts Jason Morgan (Steve Burton) to save her, and he usually does.

This is probably because of her past on the ABC soap opera, but if Carly trusts you and lets you into her life, she expects honesty in return. Carly’s problem is that she is sometimes too trusting.

This became evident when Carly’s husband Jax (Ingo Rademacher) tried to set up her ex-husband Sonny to go to jail for murdering his wife Claudia knowing that Carly’s son Michael killed her.

Michael ended up being a casualty in this and going to prison where he was raped. Carly never forgave Jax although they still co-parent daughter, Josslyn (Eden McCoy).

She knows when to turn a blind eye to mob business as well as any mobster’s wife. Carly has helped Sonny Corinthos (Maurice Benard) by giving him alibis several times as well as attempting to steal evidence from her father for him.

She knows when to keep her mouth shut and how to work the system. Carly stands by her man and her best friend doing everything she can to keep them safe.

Carly could honestly give lessons in How to be a mob wife and do it with style.

6. Carly Doesn’t Give Up

When Carly’s son Michael Quartermaine was shot and went into a coma, she was determined that he would get well and come home to his family.

Carly started a foundation to raise money for kids with brain damage on the ABC soap. Carly spends endless hours visiting Michael and willing him to live.

General Hospital spoilers revealed that Carly pushed for doctors to save her son and her persistence paid off when after a year in a coma Michael had a breakthrough procedure that not only saved his life but brought him out of a coma and he is now a CEO of ELQ. Carly is nothing if not determined.

7. Carly Corinthos Can be Selfish On General Hospital

Carly met Jason Morgan years ago and in all honesty, it seems she feels like she owns him. While pregnant with Michael, her oldest son, Carly got Jason to agree to claim to be his father. Carly didn’t want Tony Jones or A.J. Quartermaine (Sean Kanan) to take her child from her so this was her solution.

Carly left town when Michael was a baby because she suffered from postpartum depression and left him in Jason’s care. Eventually, she came home and became a family with Jason and Michael, and honestly thought she owned him.

Carly often believes that her way is the only way to go and will do whatever it takes to make that happen. She never thought Jason was entitled to a life of his own because she wanted him at her beck and call. Carly still expects Jason to save her from any situation she is in and he usually does.

WHAT DO YOU THINK ARE THE MOST IMPORTANT CARLY CORINTHOS CHARACTER TRAITS?