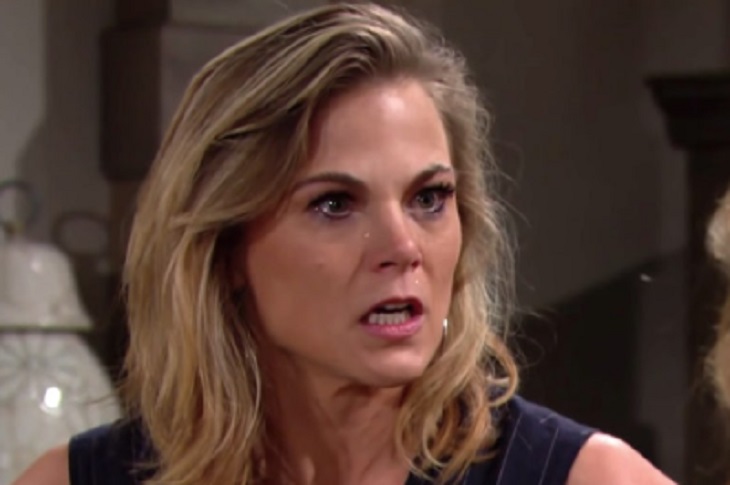 Phyllis (as played by Gina Tognoni) was actually rather nice within the last few years on ‘The Young and the Restless’. That would be in comparison to the way in which the classic edition, as fronted by Michelle Stafford, had been written for many years. But the J.T. (Thad Luckinbill) storyline set this character on a retro course.

It’s not as though modern Phyllis was all sweetness and light. She wasn’t. But Tognoni’s version was far more vulnerable and lighthearted, as this actor’s comedic chops are sharp. The introspective and at times self-deprecating alter ego that the current actor plays reverted to her old self within moments after Nikki (Melody Thomas Scott) hit J.T. over the head in Vickie’s (Amelia Heinle) bedroom last April.

Young And The Restless Spoilers – Phyllis’ Blast From The Past

After appointing herself as the “Fearsome Foursome’s” (Vickie’s term) fixer, Phyllis has been behaving like she was living in the 1990’s and ‘Cricket’ (Lauralee Bell) was still her main rival. Phyllis’ fear was and remains that Christine, Genoa City’s District Attorney, will seek retribution for the hit-and-run that was never able to be prosecuted.

Phyllis ran down ‘Pristine’ (Paul, Doug Davidson, and Christine) all those years ago when Stafford was working as this character. Never admitting to the truth because enough evidence wasn’t gathered to prosecute, meant that Phyllis didn’t face justice for the crime purposely committed. So, she’s right to think that Bell’s character and Paul, assuming Y&R’s new leadership team brings Davidson back, will go after her as part of the J.T. fallout, whenever that happens.

Along with the above, Nick (Joshua Morrow) wasn’t told by his mom that Phyllis, or Sharon (Sharon Case) were there the night J.T. accidentally died. When he learns that and if Phyllis has had any involvement in Victor’s (Eric Braeden) frame, as has been implied via recent scenes, Nick’s view of his renewed love will be affected.

‘Phick’ initially formed when Stafford was part of the cast. Its back with Tognoni now taking the other half. But just as that unbalanced couple once unraveled, so too could it again because Phyllis is acting like her old self.