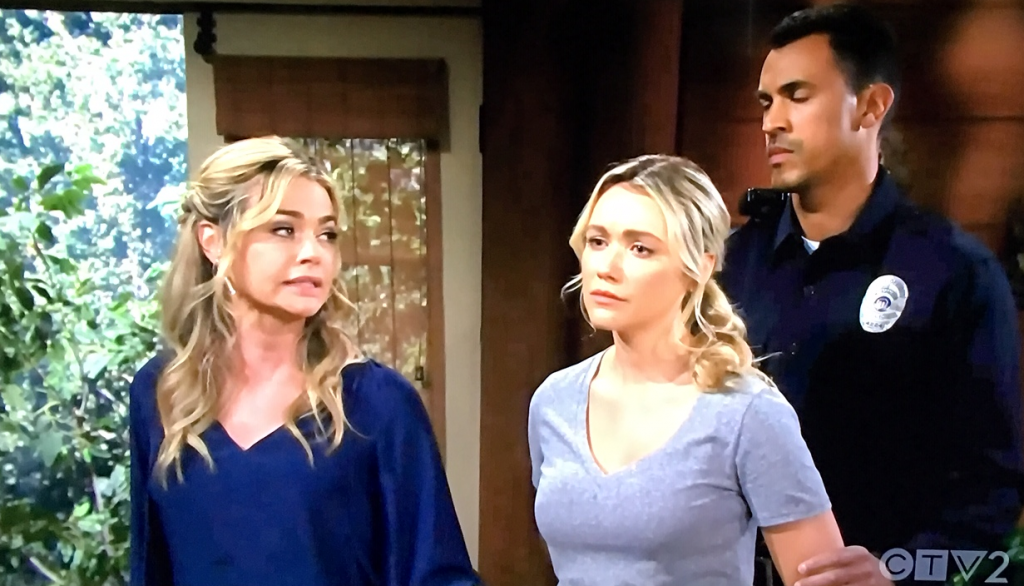 The Bold and the Beautiful recap for Monday, August 19th finds Flo Fulton (Katrina Bowden) in handcuffs, but not before she gets a slap in the face by her cousin Hope Logan (Annika Noelle). Shauna Fulton (Denise Richards) fights for her daughter while Bill Spencer (Don Diamont) thinks about what needs to be done next.

It begins at Brooke Logan’s (Katherine Kelly Lang) mansion, where Shauna believes that her daughter Flo will manage to somehow get to Hope. Katie Logan (Heather Tom), doesn’t think so as she reminds her that Flo lied about a stolen baby. Ridge Forrester (Thorsten Kaye) is there. Ridge says that there’s a difference between intentions and actions.

Shauna tries to put the blame on the doctor who orchestrated the swap. Ridge says everyone connected with the swap is to blame. With that said, Shauna is still trying to get everyone to show her daughter a little forgiveness. She doesn’t want to see her end up in jail. Brooke intervenes and says that Flo doesn’t belong as a part of the family because she’s a thief and nothing else.

Back at the cabin Hope can’t believe that Flo is there asking her for a second chance. Flo, however, says she wants to turn her wrongs into rights. She wants to show Hope that she can be trusted again. Hope says that’s never going to happen.

Hope says that if Flo even knew a little of what she had gone through, she wouldn’t be showing her face at the cabin right now. The two women start shouting at one another with Flo implying that she’s a victim in all of this, too. Hope screams that she doesn’t want to hear what Flo has to saw.

She’s angry that she had to go through so much pain just to pay off someone else’s gambling debt. She slaps Flo across the face and tells her that’s what she deserves. She also says that she’s not her uncle’s child but her uncle’s bastard.

Detective Sanchez (Jay Valdez) arrives at the scenes. Ridge called him to the mansion. Shauna tells Flo not to say anything as the detective arrests her for kidnapping and fraud. Shauna begins to cry as her daughter is taken away.

At the beach house, Wyatt Spencer (Darin Brooks) says that he’s happy for Liam Spencer (Scott Clifton) now that his life is back in order. Bill Spencer (Don Diamont) arrives and is sorry that Hope and the baby are not there. The men start to talk about Dr. Reese Buckingham (Reese Brady) and how he should pay for his crimes.

Realizing she has no right to Hope’s forgiveness, Flo begs for it anyway today on #BoldandBeautiful. pic.twitter.com/gr53UVuokT

Wyatt doesn’t think that Flo will fight the charges against her. Liam senses that Wyatt might still have feelings for her. Wyatt says that’s not the case. Bill, meanwhile, says that he wants Flo and Reese to pay dearly for what they did to his family.