Sharon Newman (Sharon Case) does have more sympathy for Adam Newman (Mark Grossman) than anyone in Genoa City, Wisconsin, on ‘The Young and the Restless’. She remains vulnerable to him, but maintains reason as well.

Adam’s transparent ploy to propose marriage to Sharon is obviously tied to his desire to front a solid personal life. He believes that having a wife who cared for Christian Newman (Alex Wilson) during the earliest days of his life would score points with the custody judge.

Victor Newman’s (Eric Braden) plan worked, initially. Sharon was the key to convincing Adam to return to GC, where his family was.

Chloe Mitchell’s (Elizabeth Hendrickson) second hit attempt failed, as her tack house shot was slightly off. Unintended consequences had Adam the cat use another of his lives and restore his memory too.

His subsequent behavior since then has been increasingly horrible. But Sharon sees through all of it, though she’s not invincible as the ‘Shadam’ reconnect at the penthouse proved. Though that event might have been a preview, rather than a wink to the past. 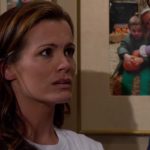 Adam proposed Sharon as the ideal person to serve as Christian’s temporary guardian. The custody judge considered her, but opted for the boy’s aunt instead.

Vickie Newman (Amelia Heinle), another of Adam’s family member enemies, is currently stymieing visitation. However, the plan she and Billy Abbott (Jason Thompson) are carrying out appears ready to backfire.

Billy has allowed himself to become unhinged. Yes, he’s confided in Vickie and saw a therapist. But he should have checked himself into Fairview, as he’s playing tricks with his own mind in conjuring up the spirit of Delia Abbott (Sophie Pollono) as a method to exact revenge against Adam.

If Vickie doesn’t recognize what’s happening to Billy in time, or isn’t around to stop him, he could do something terrible to his revived nemesis. Of course Grossman’s character would survive, but would the custody judge then allow the second guardian pick, Sharon, to take control of Christian?

Sharon knows that Chelsea Boudreau (Melissa Claire Egan) is Adam’s true love. Yes, ‘Shadam’ shared a deep love. But the past tense must be used where that former couple is concerned, as ‘Chadam’ fully supplanted it and also share a child, Connor Newman (Judah Mackey), who’s custody rights are next up on Adam’s legal docket.

Sure, ‘Shey’ isn’t together right now. But Rey Rosales (Jordi Vilasuso) and Sharon still have spark and could reunite during any episode. If they don’t Y&R fans know that a ‘Shadam’ sequel, even if it’s temporary, or concocted for reasons involving custody rights, could happen. Maybe, for the sake of daytime drama, they should.

Days of Our Lives Spoilers: Kristen Is Finally Exposed