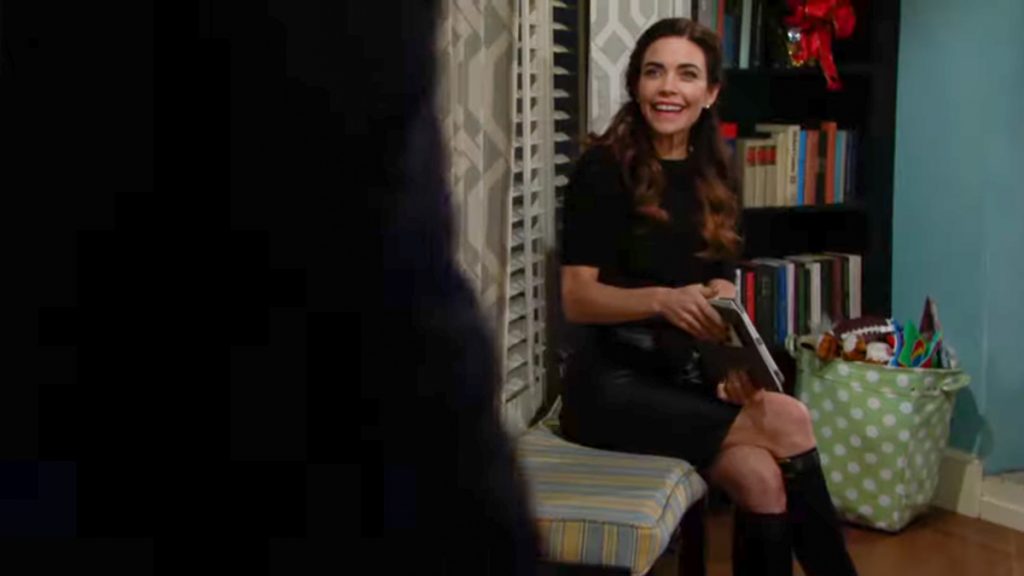 As viewers of The Young and The Restless know, Victoria is having Billy Abbott (Jason Thompson) trouble again. Billy has suddenly become irresponsible, quitting Jabot on a whim and not caring to find another job, she may be finding out by this time that he’s been lying, and suspect that he’s either regressed in his dissociative identity disorder, or his behavior or habits.

She may suspect he’s either drinking, gambling, cheating on her or possibly even doing drugs, although that is not something that has happened since she has been involved with him! He has, however been arrested for drug trafficking in his past, in Myanmar. Victor will notice that his daughter seems preoccupied and stressed, although she may try to hide it and he will worry about her.

Victor knows that Billy quit Jabot, he has known that almost since the day Billy blindsided his older brother Jack Abbott (Peter Bergman) and his nephew Kyle Abbott (Michael Mealor) the day he suddenly quit. It was quite sudden and out of the blue, and seemed rather suspicious in a way! Victoria almost immediately tried to push him to find another job, one he would enjoy, but he bucked against her from the start.

The only place he feels comfortable at is a dive bar and the only person he feels comfortable with is Amanda Sinclair, (Mishael Morgan) who Victor is very suspicious of and had complied a dossier on to give to Devon Hamilton (Bryton James). Neither Victor nor Victoria know that Billy is rapidly becoming close to Amanda yet, however.

Young & The Restless Spoilers – Will Victoria Newman Talk To Her Father, Or Maybe Her Mother About This?

The question is, will Victoria talk to Victor, or perhaps her mother Nikki Newman (Melody Thomas Scott) about this problem that Billy is rapidly becoming? There is a possibility that if the problems at home were to become too overwhelming, it could affect her work, and as CEO of Newman Enterprises, Victoria cannot afford to let them distract her. However, the sadness, the stressed looks, the strained smiles are always a dead giveaway, not to mention showing up for family meetings and get-togethers minus her husband, who may be out doing who knows what with who knows who and lying about it.

Victoria is no saint herself, and a strong enough woman to run a corporation, but still, her husband and her home and children are her heart, and if her heart is hurting her parents will want to be there for her and support her, and her father will want to solve the problem for her if he can! Victor may have some choice words for “Billy Boy” as he calls him, when he finds out what’s been going on!

Bold And The Beautiful Spoilers: Wyatt Explains Why His Relationship With Sally Has Become Complicated