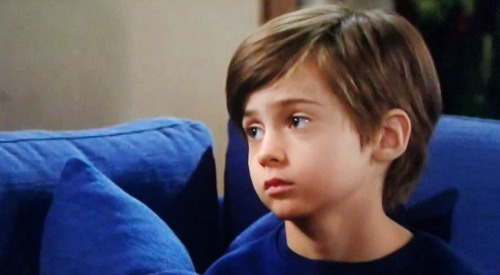 The Young and the Restless (Y&R) spoilers for Tuesday, December 10, tease that Victoria Newman (Amelia Heinle) will have a surprise in store for Billy Abbott (Jason Thompson). At Society, Victoria will explain her idea for a holiday getaway. Billy’s taken aback to learn everything’s all set and would’ve rather gone to the beach than to Telluride. He also wanted to push the trip until a couple days after Christmas, so a glum Victoria suggests they should table this conversation.

At Adam Newman’s (Mark Grossman) penthouse, he plays cards with Connor Newman (Judah Mackey) and Chelsea Lawson (Melissa Claire Egan). Connor’s annoyed when their game’s put on hold for Sharon Newman’s (Sharon Case) visit. Once they’re alone, Connor mentions that he told Sharon not to come anymore. He wants to know why she’s there and insists he was having a great day until she came along.

Sharon tries to get Connor to play cards with her, but he tosses them on the floor. Adam comes downstairs soon after and thanks Sharon as she leaves. Connor spins a story about Sharon being mean to him. He argues that Sharon threatened to have him sent away. Connor also lies about Sharon saying the monster would be back and no one could do anything to stop it.

At Crimson Lights, Sharon’s deep in thought over Connor’s problems. She gets support from Rey Rosales (Jordi Vilasuso) before Adam appears. Adam brings Sharon up to speed on Connor’s lies, which he could see right through immediately. Sharon suggests that Connor needs to know his parents won’t stand for lying or manipulation.

After Adam exits, Rey once again voices his support for Sharon. He feels like Sharon may be Connor’s best hope at getting help. Over at the ranch, Nick Newman’s (Joshua Morrow) grateful that Christian Newman (Alex Wilson) can spend the evening with his grandparents. This will bring a chance to spending time alone with Chelsea.

Victor Newman (Eric Braeden) gives Nick a hard time about his derailed political career and the fact that Chelsea’s responsible. He insists the two people Nick made the sacrifice for are living at Adam’s place. Once Nick’s alone with Nikki Newman (Melody Thomas Scott), she can see Victor’s point about Chelsea. Nikki feels like Chelsea’s decisions have had a negative effect and made her difficult to trust.

A little later, Victor and Nikki discuss “Chick’s” romance. They don’t believe Chelsea and Nick are right for each other. However, Nikki does believe people can change and likes the new-and-improved Victor. She’s also glad Billy is doing what he needs to do for himself and his relationship with Victoria.

The Young and The Restless Weekly Spoilers December 9 to December 13: Elena And Devon In Crisis Mode https://t.co/Hlc0QKWjc1 pic.twitter.com/Sy49mJepCO

After warning Nick she can’t spend the night, Chelsea heads to Society with him. It isn’t long until they start arguing about Adam and this bizarre living situation. Nick insists it isn’t normal and asks if Chelsea will live with her ex-husband until Connor goes off to college. Chelsea reiterates that this is simply about doing what’s best for her son.

Nick hopes to get their evening back on track, but Chelsea’s summoned away by Adam’s text. Victoria joins Nick since Billy bailed on her as well. She warns that Chelsea can either be with Nick or with Adam. Chelsea can’t have it both ways. Victoria also reflects on Billy’s issues and worries about how he’s handling his resignation at Jabot.

At the dive bar, Billy’s pleased that he can relax there and not have to answer to anyone. Billy eventually texts Victoria to let her know he’s sorry about earlier and that they’ll indeed go to Telluride. Afterward, Billy plays poker and wonders why this doesn’t feel better. Once Billy makes it home and lies about his workout, he approves of Victoria’s idea of washing his back in the shower.

Back at the ranch, Victor gently reminds Nikki not to meddle when she brings up the possibility of chatting with Chelsea. Next, Nick returns for Christian and tells Nikki that he knows what he has to do now. As for Chelsea, she makes it to the penthouse and frets over her decision to move in. Adam points out that the kid’s only made progress since they’ve been together there. He wants to make Connor understand that his lies and manipulation regarding Sharon aren’t acceptable.

The Young and the Restless spoilers say Connor may not listen, so Sharon could find herself in a risky situation soon! We’ll give you updates as other Y&R news and rumors emerge. Stay tuned to see what else is ahead on the CBS soap.