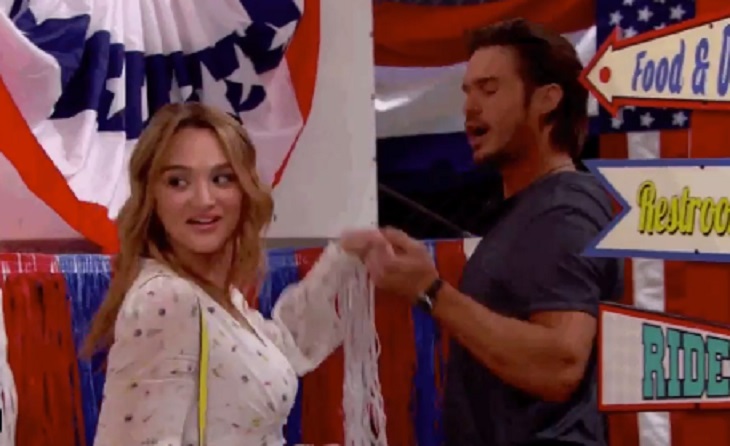 The Young and the Restless (Y&R) spoilers tease that Theo Vanderway (Tyler Johnson) will take Summer Newman (Hunter King) out and get her drunk, then he leaves her alone. Phyllis Abbott (Michelle Stafford) will find her daughter and take her home. This will strengthen the bond the mother-daughter have, and they will begin to rebuild their relationship.

Theo takes Summer out for a day out. They go to the carnival and, at least, at first, they seem to be having a great time. Then, Summer begins to talk about how she never wants to get married again. She will point out that marriage ALWAYS ends up a disaster. Theo replies to her anti-marriage spiel that she recently agreed to Kyle Abbott (Michael Mealor), to which Summer dubbed the “worst mistake of her life.”

Then after they see the carnival, Theo suggests they go relax by having some drinks. One thing leads to another and they are completely drunk. Y&R spoilers tease that Summer gets so drunks she passes out for a little while.

While she is sleeping, Theo leaves her alone. The soap opera hints that he was sick of hearing about Kyle and Lola Rosales (Sasha Calle) so he decided to leave her alone. And, he waited until she was passed out to escape. It’s understandable that he didn’t want to be open with her and tell Summer that she’s talking about her ex too much but leaving her in such a fragile state is not good.

Phyllis runs into Summer and realizes that she is completely drunk. She begins to ask her some questions, and she figured out Summer’s date left her and didn’t let her know he was leaving.

Young And The Restless Spoilers – Phyllis Furious At Theo

Y&R spoilers tease that Phyllis comes unglued. She cannot believe that Theo would leave her daughter in such a venerable state. We suspect Theo will regret doing that as she looks like she might have a confrontation with him.

Phyllis takes Summer home and lets her know that she loves her. It looks like this could be the beginning of the two rebuilding their relationship and learning to accept each other’s faults.

Do you think Summer will forgive Phyllis?