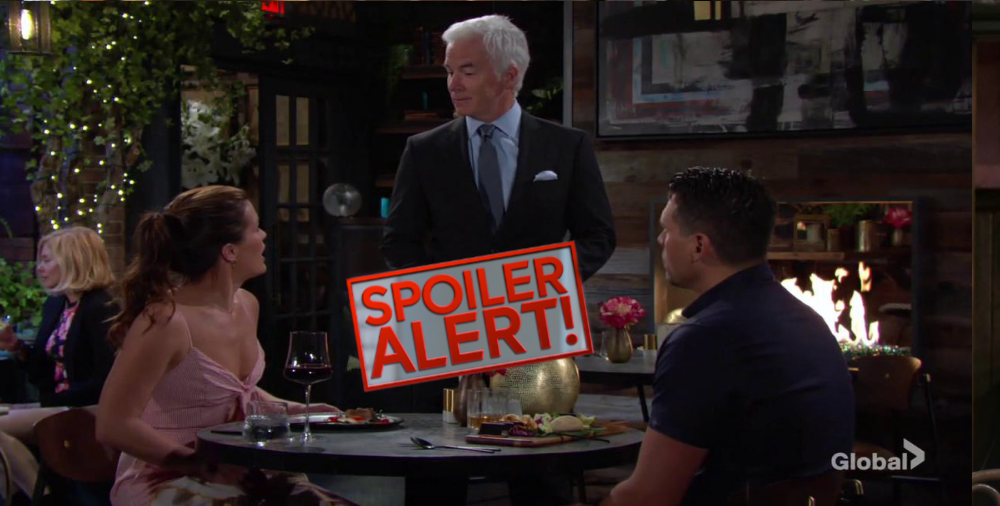 The Young and the Restless spoilers for Wednesday, June 3, tease that Victor Newman (Eric Braeden) will tell his daughters Abby Newman (Melissa Ordway) and Victoria Newman (Amelia Heinle) about the experimental course of treatment for his PNH. Victoria will suspect that there’s a side effect that Victor is particularly concerned about, but Nikki Newman (Melody Thomas Scott) will deny it. Victor will thank his girls for their support.

Meanwhile, at Society, Nick Newman (Joshua Morrow) and Chelsea Newman (Melissa Claire Egan) will talk, and it will turn out that Chelsea went to Louisiana to be with her mother when she left Genoa City and that Chelsea’s mother dated Calvin Boudreau (John Burke), but he ended up with Chelsea.

Suddenly, Calvin will appear, and Chelsea will introduce him to Nick and explain that she needed to come to Genoa City and tell Adam Newman (Mark Grossman) where she stands. Ultimately, Chelsea will leave with Calvin, but she’ll look back anxiously at Nick as she does.

Next on Y&R, at Dark Horse, Phyllis Summers (Michelle Stafford) will give her designer instructions about designing her new penthouse, which will be in a brand-new high-rise building that should be completed in a month.

At Crimson Lights, Theo Vanderway (Tyler Johnson) and Summer Newman (Hunter King) will have coffee after partying, and Summer will get a text from Kyle Abbott (Michael Mealor). He’ll let her know that Billy Abbott (Jason Thompson) is upset and that she’d better get to Jabot if she wants to keep her job there.

Summer will then vent to Theo about Kyle, and this will get on Theo’s last nerve. Theo will say that he refuses to listen to her obsess over Kyle, and he’ll leave for Austin.

Next, on Y&R, Elena Dawson (Brytni Sarpy) will arrive at Devon Hamilton’s (Bryton James) penthouse from the supermarket, and Devon will remark that he’s glad she’s feeling more at home there. Devon will say that he wants to take her on a date and that they’re going to go “back in time.”

Next, on Y&R, Devon and Elena will be at the carnival, as will Victor and Nikki. The four will run into each other, and it will be revealed that Elena won a huge teddy bear while Deon won a small one. Nikki and Victor will be pleased that Devon has found happiness again.

Meanwhile, Phyllis will run into Summer at Crimson Lights. Summer will not want anything to do with her mom, but she’ll stumble due to drinking too much. Phyllis will insist on helping her and will say that she’ll always be there for her.

Up in Phyllis’ room at the GCAC, Summer will fume about Theo and how he left after she just said Kyle’s name once. She will want to text Theo and tell him he’s a jerk, but Phyllis will stop her. Phyllis will hold her daughter and Summer will apologize for getting angry before. Later, Phyllis will watch Summer sleep.

Finally, on Wednesday’s new episode of Y&R, Elena will put the small teddy bear that Devon won for her beside a photo of Devon, Neil Winters (Kristoff St. John), and Lily Winters (Christel Khalil). Devon will remark that it’s perfect and that every time he sees it, he will remember their second first date.

Be sure to tune in on Wednesday to catch up on everything happening on Y&R right now.