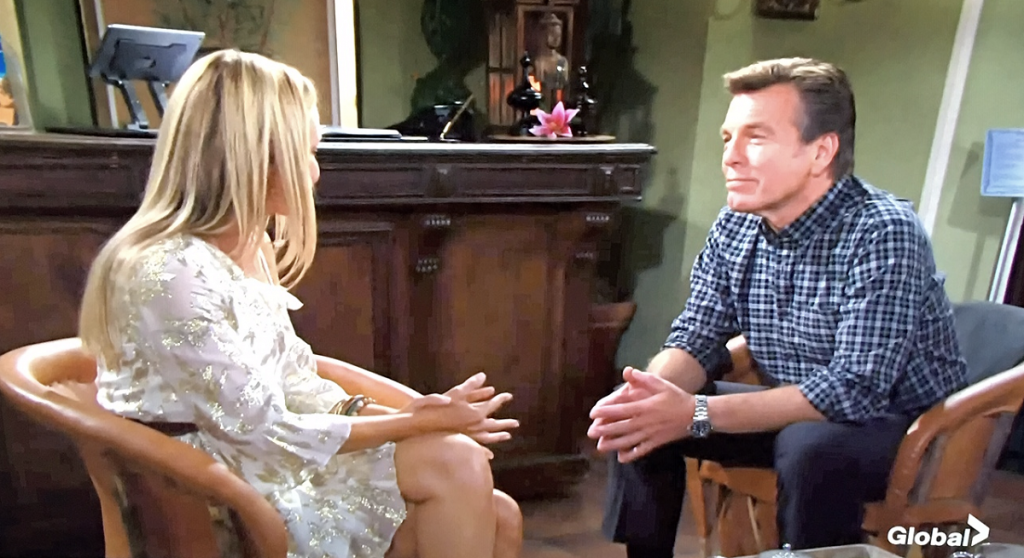 The Young and the Restless spoilers tease that Sharon Newman (Sharon Case) and long ago ex-husband Jack Abbott (Peter Bergman) will wind up at the same hotel and spa in Sedona, Arizona, with neither knowing the others’ plans!

Jack and Sharon had been married about ten years ago, after his then wife Phyllis Summers Newman (Michelle Stafford) had began having an affair with Sharon’s husband Nick Newman (Joshua Morrow). The two jilted spouses became close friends, drawn together in their pain, and later fell in love and married. However, the union was short-lived and only lasted for a couple of years.

Jack wanted to take a road trip to kind of find himself and to decide what would make him happy; Sharon wanted to get away to find some perspective in her life. Jack, for one, wants to understand why his relationships never last and maybe even find a soulmate.

The Young And The Restless Spoilers: Chelsea Worries About Adam’s Dark Side As He Renews His Bond With Connor https://t.co/ucd526zp2E pic.twitter.com/hM1BO5pY3C

Sharon wants to get a fresh start after her breakup with Rey Rosales (Jordi Vilasuso) and one night stand with Adam Newman (Mark Grossman). Even though it was totally unplanned, when they get to the hotel and spa in Sedona, Arizona, they are pleasantly surprised to run into each other.

Now, if these two hadn’t been around the block a few times previously, including with each other, they could have easily thought they were fated to be together. It is such a weird coincidence that they show up at the same time in the same place halfway across the country.

However, it turns out to be a time of talking to good friends who just happen to be ex-spouses and they talk to each other about their individual issues. Since they aren’t back in Genoa City, and there are no prying eyes wondering what they are doing together or talking about,  they find it easy to talk over these things.

However, through hashing out their individual issues and past mistakes with each other, they come to a conclusion that they can’t repeat the same mistakes again when it comes to relationships. They also talk about why they made the mistakes and also recognize, with the help of each other’s perspective, which actions were mistakes.

For now, they enjoy each other’s company and not being totally among strangers in a nice resort in a beautiful place, and just have some relaxed fun with each other. However, they will be surprised as this trip turns out to be rewarding for the both of them in more ways than one. They may even try again with each other, determining not to make those same mistakes that broke them up the first time!