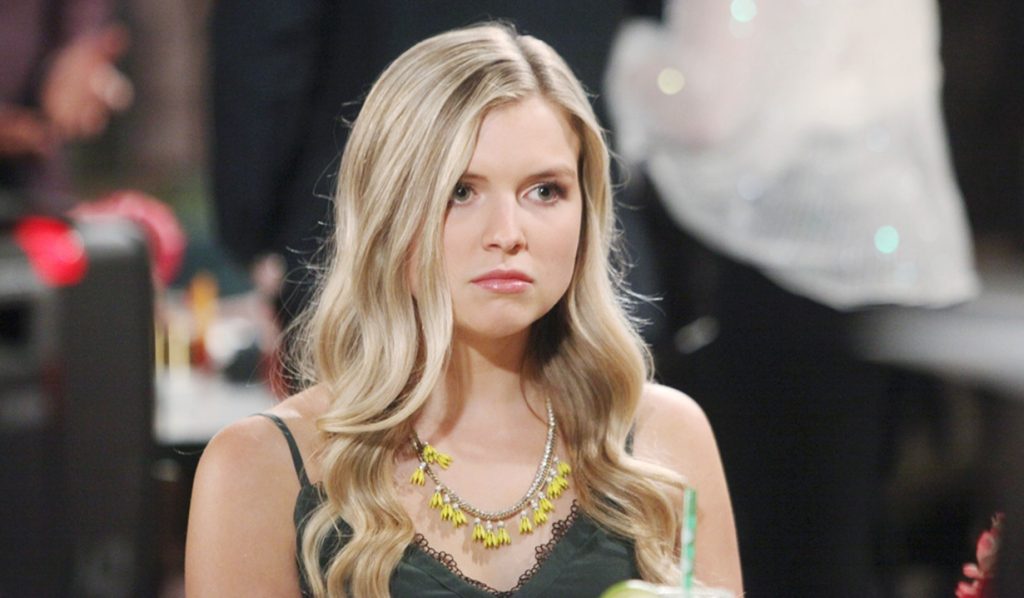 The Young and the Restless spoilers for Thursday, September 12, tease that Chelsea Lawson (Melissa Claire Egan) will update Nick Newman (Joshua Morrow) on how Zoe Hardisty (Anna Grace Barlow) is likely the one who spiked the sangria at The Grand Phoenix opening, but that they have no evidence of that.

Chelsea will be concerned about the case not getting solved and the effect it will have on their business. She’ll then get a text from Phyllis Summers (Michelle Stafford).

Meanwhile, at The Grand Phoenix, Abby Newman (Melissa Ordway) will also get a text from Phyllis. Nate Hastings (Sean Dominic) will comfort her, then Paul Williams (Doug Davidson) will arrive and relay that the security footage was nil. Nate will reassure an upset Abby, who will then get a text from Chelsea.

Next on Y&R, Phyllis and Adam Newman (Mark Grossman) will talk at his penthouse. Phyllis will insist that she was not behind the mass drugging at The Grand Phoenix, but she’ll definitely plan on taking advantage of the situation.

She’ll say that she’s going to get back what she deserves, and that she can prove who drugged the sangria. Adam will figure out that she’s planning to ask for a stake in The Grand Phoenix. In conversation, Phyllis will let Adam know that Sharon Newman (Sharon Case) was one of the drugging victims and that her meds interacted with the drugs.

Later, Sharon will find Rey Rosales (Jordi Vilasuso) waiting for her at Crimson Lights. They’ll discuss the events at the party, including their embarrassing kiss.

Rey will need to get her statement about the party, and she’ll end up letting him know that she’s going away for a while and that she’s going alone. Adam will arrive later to check in on her, and he’ll offer to help her, but she’ll tell him that she’s soon taking a trip and going away. She’ll leave and Adam will smile to himself.

Next on Y&R, Victoria Newman (Amelia Heinle) will answer a call from someone she’s got looking for Billy Abbott (Jason Thompson). Meanwhile, Victor Newman (Eric Braeden) and Nikki Newman (Melody Thomas Scott) will discuss Victor’s setback at their residence. Nick will arrive, but Victor won’t want to talk about his health. Then Victoria will arrive, upset over her search for Billy being a bust.

Victor will then have a weak episode in front of everyone, and Nikki will say that Victor hasn’t been well for the past couple of days. Victor won’t want to go to the hospital, but he’ll call Nate, who will arrive later and examine Victor. Nate will say that he has Victor’s latest test results, and Victor will go into the office with Nate to hear the news.

Back at Nick’s house, Abby and Chelsea will talk about Phyllis’ text messages. They won’t want to deal with her now, but Phyllis will appear and tell them that she has proof that it was Zoe who drugged the sangria, and that she wants a stake in The Grand Phoenix.

Abby will demand to see the evidence she has, and Phyllis will play them the confession on her phone, then reveal that she hacked the security footage from the hotel.

The women will discuss, and after some negotiation, Abby and Chelsea will agree to give Phyllis a 25% stake in the hotel. Phyllis will just happen to have a contract in hand for them all to sign. Meanwhile, at The Grand Phoenix, Rey will learn from Paul that part of the security footage was deleted. They’ll agree that Zoe probably couldn’t have pulled that off by herself.

Next on Y&R, Adam will play cards with Connor Newman (Judah Mackey). Connor will have a great time, and he’ll wish aloud that Adam and Chelsea would get back together. Adam will indicate that this probably won’t happen, but that he’ll still be a part of Connor’s life.

Young And The Restless Spoilers: Devon's World Spins Out Of Control As A Secret Enemy Attacks @celebratesoaps https://t.co/b4opNBpM64

Y&R Spoilers – Zoe Hardisty Is Arrested For The Mass Drugging

Finally, on Thursday’s episode of Y&R, Zoe will appear at The Grand Phoenix to meet with Phyllis, but it will be a setup, and Paul and Rey will promptly arrest her. While Abby and Chelsea stand by, Zoe will spell her name for the reporters who are on the scene. Afterwards, Phyllis will whip out some champagne for a celebration. She’ll want to be chief of security, and she, Abby, and Chelsea will toast.

The Young And The Restless Spoilers: Sharon Abandons Adam – Jordan Threatens To…