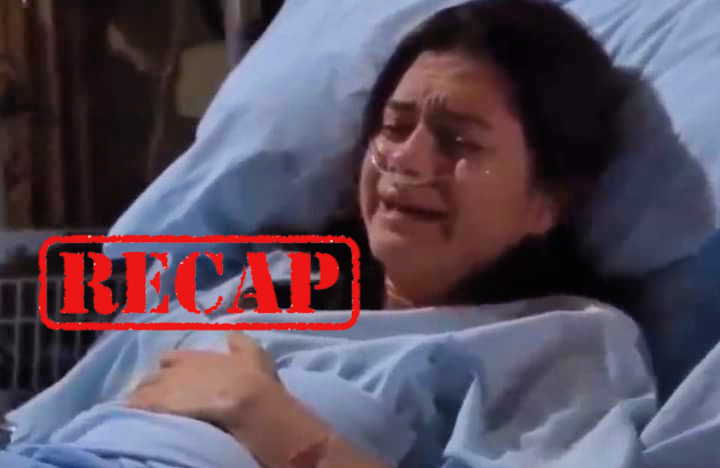 “Young and the Restless” (YR) recap for Monday, March 25, 2019, reveals that over at the cabin gas fills the room as J.T. Hellstrom (Thad Luckinbill) is passed out on the floor. Victoria Newman (Amelia Heinle), Sharon McAvoy (Sharon Case) and Nikki Newman (Melody Thomas Scott) begin to lose consciousness.

Y&R Spoilers: The Ladies Are Rescued

Outside the cabin, Billy Abbott (Jason Thompson) and Phyllis Summers (Gina Tognoni) find the security guards unconscious. Nick Newman (Joshua Morrow) and Victor Newman (Eric Braeden) arrive on the scene. They enter the cabin to find everyone unconscious; they carry out everyone outside, including J.T. Rey Rosales (Jordi Vilasuso) arrives on the scene, and calls for ambulances. Sharon and Nikki begin to cough and regain consciousness. Billy performs CPR on Victoria and she also regains consciousness.

Young and the Restless Spoilers: JT Hellstrom’s Taken To The Hospital

Rey says J.T. is alive, and that they’ll have to tell the truth about what happened. Nikki explains what happened, that J.T. cut off the electricity and threatened them with the gun, and then the gas leak happened. Sharon says J.T. said he wanted it to stop, “Make it stop”. As J.T. is hauled off on a stretcher, Victoria tells Billy she didn’t recognize J.T. at all and wondered if they did that to him. Billy says it was him the whole time. Victor asks Rey if he’ll really go through with telling the truth.

It’s a can’t miss week on #YR. 👏 Mia’s causing trouble, Paul’s taking charge, AND you’ll all get rocked by a massive twist! pic.twitter.com/EVZWgkR7Oy

At the hospital, Y&R’s Lola Rosales (Sasha Calle) wakes up from the anesthesia; Arturo Rosales (Jason Canela) visits. Meanwhile, Dr. Nate Hastings (Brooks Darnell) tells Kyle Abbott (Michael Mealor) they’ll keep a close watch on Summer Newman (Hunter King). As soon as he leaves, Summer wakes up. Kyle tells Summer the surgery went great. Summer said all she wanted was to have her husband there when she woke up. Mariah Copeland (Camryn Grimes) arrives and asks when Kyle is going to tell Lola about marrying Summer. Meanwhile, Lola asks Arturo if the donor is okay, and asks if he’s spoken to Kyle.

At the GCAC, Jack Abbott (Peter Bergman) asks Kerry Johnson (Alice Hunter) if she has an update. She says she’s still waiting to hear back from her attorney. Someone called PC calls Kerry; Jack asks who it is, touching a nerve. Kerry says she owes Jack so much, and that he’s reminded her how to enjoy life again. Jack says it sounds like it’s the last time he’ll hear from her. Jack gets a call from Tracy Abbott (Beth Maitland) about Dina Mergeron (Marla Adams) and has to run.

Y&R Rey Fills Christine In On The Trap

At the police station, the women are taken in for questioning. Christine Williams (Lauralee Bell) confronts Rey Rosales who tells her about the trap to catch J.T. Hellstrom, and that he’s now in hospital. Rey leaves to see Lola Rosales. Victor Newman yells at Christine for arresting the women. Then Victor asks Nick Newman why he didn’t ask for help, and says he respects Nick for taking a big risk for the family.

At the Abbott house, Y&R’s Tracy Abbott tells Jack Abbott what happened with Dina Mergeron. Dina is asking for Ashley Abbott (Eileen Davidson), and doesn’t seem to recognize Jack. Jack tells Dina that Ashley has moved to Paris. Dina confuses Jack for John, saying she’d break his heart every time she’d go on trips. She asked when Ashley is coming back; Dina says she misses her so much. Jack says Ashley had to do what she had to do, and doesn’t fault her for that. Tracy asks what Jack is up to. Jack admits that Jabot has always been a family company, and is willing to do whatever it takes to put the company back in their hands.

Back at the hospital, Rey Rosales bumps into Mia Rosales (Noemi Gonzalez) who says she wants to work things out. Rey says he needs to move her things out of their home before he leaves. Mia bumps into Arturo Rosales, and she tells him that Rey is kicking her out because they had an affair. Arturo says he won’t let Mia blackmail him, even if he tells Abby Newman (Melissa Ordway) himself. Kyle Abbott visits Lola Rosales and tells her that Summer Newman is the donor.

Kyle explains that he married Summer so she would have the surgery in order to save Lola’s life. He says he loves her that much. Lola asks Kyle if he slept with Summer. Kyle says he loves Lola, and it was a sacrifice he was willing to make. Through tears, Lola says she’s grateful he and Summer saved her life, and could never repay him. Lola says he should be with his bride. Mariah Copeland visits Summer and tells her that Kyle is telling Lola everything. Mariah says she feels sorry for Summer. 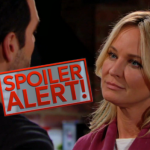 At the club, Phyllis Summers confronts Kerry Johnson about not coming to her about a new hire named Dominique Carol. Kerry says she’s unpaid and didn’t think she’d need to know about it. Doesn’t she trust her? Phyllis calms and agrees she does. Phyllis goes and Kerry texts PC, “Final paperwork in. We’re set.”

Rey Rosales returns to the police station. Christine Williams says the women need to be put back into the holding cell until she can sort everything out. Rey tells Sharon McAvoy that Christine will have to overturn the convictions, and hopes to make things right, despite what could happen to him and his job. Victor Newman tells Nick Newman he’s sure the women will be freed considering J.T. Hellstrom is still alive. In the cell, Victoria Newman says something is very wrong with J.T.

Y&R’s Christine Williams visits J.T. Hellstrom at the hospital. And that’s a wrap. Don’t forget to check often with Soap Opera Spy for all your soap needs!