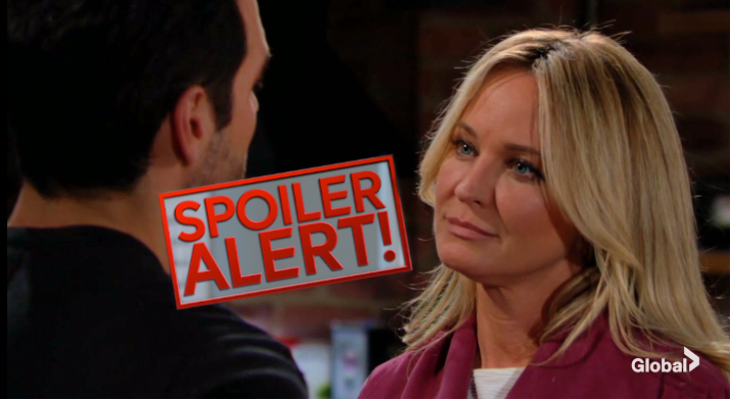 “Young and the Restless” spoilers for Tuesday, March 26, tease that Paul Williams (Doug Davidson) will make Rey Rosales (Jordi Vilasuso) suffer the consequences. At the police station, Paul chews Rey out for being a rogue cop and refusing to follow the rules. He forces Rey to turn in his badge and weapon, so it’s clear that Paul isn’t messing around!

At the ranch, Victor Newman (Eric Braeden) reassures Nikki Newman (Melody Thomas Scott) about their daughter. He promises Victoria Newman (Amelia Heinle) is going to be OK and presents Nikki with a beautiful necklace. She kisses Victor as they enjoy her new freedom.

Young and The Restless Spoilers: Sharon Newman and Family Celebrate Her Freedom

At the cottage, Mariah Copeland (Camryn Grimes) spends some time with Sharon Newman (Sharon Case) before heading to GC Buzz. Nick Newman (Joshua Morrow) stays behind to chat with Sharon over pizza, which is the first meal Sharon wanted when she got out of the slammer. Sharon is thankful to Nick for saving her life, but he notes that Billy Abbott (Jason Thompson) and Rey were just as involved.

Sharon & Rey kiss. EEK!!
I didn't catch the greatest cap but who cares? They're happy & in love.
Life is good. #Shey #YR pic.twitter.com/TydBxaIHQi

Nick admits that Rey loves Sharon while Arturo Rosales (Jason Canela) stuns Abby Newman (Melissa Ordway) at Dark Horse. After Arturo reveals that he slept with Mia Rosales (Noemi Gonzalez), he explains how and when it happened. Abby is livid, so she heads for the parking garage and smashes Arturo’s truck with a hammer.

Meanwhile, Rey comes home to see that Mia’s packing her stuff up. She learns he was fired over what he did for Sharon. Mia and Rey end up sparring about his new love, so she blurts out that she had sex with Arturo. Rey isn’t completely taken aback by that. He questions if the baby is even his, but Mia doesn’t think he truly cares.

Back with Arturo, he tracks Abby down and reminds her he loves her. Abby doesn’t want him to say that to her ever again. Afterward, Rey appears and punches Arturo in the face for sleeping with Mia. Once his brother has paid, Rey heads over to Sharon’s place and lets her know it’s all over with his wife. Sharon is the only woman Rey wants to be with, so they lean in for a lip lock.

At the hospital, Victoria listens as Dr. Nate Hastings (Brooks Darnell) explains J.T. Hellstrom’s (Thad Luckinbill) medical condition. They removed a brain tumor, which might’ve been causing his outrageous behavior. J.T. wants to see Victoria, so she heads in and hears his heartfelt apology. He knows he can’t erase what he did, but he’s so sorry.

Victoria points out that J.T. tried to kill J.T. and is still a wanted man because of it. J.T. believes he deserves whatever he gets. Victoria assures J.T. that she could never hate him, but she can’t just forget what she’s been through. Christine Williams (Lauralee Bell) shows up eventually and fills J.T. in on the impending charges. He’s prepared to face any legal ramifications that come his way.

Victoria heads home and has a nice reunion with her children, but she isn’t interested in talking to Billy. She urges him to go, so it seems Victoria still has some issues to deal with. Fortunately, Billy isn’t the kind of guy who gives up on someone who needs his help.

When Arturo meets up with Mia, he reveals that Abby broke up with him over his confession. However, Arturo is just glad Mia’s going to be lonely and miserable tonight. “The Young and the Restless” spoilers say things may get worse for Mia soon enough! We’ll give you updates as other Y&R news and rumors emerge. Stay tuned to see what’s next in Genoa City.