Viewers of The Young and The Restless will recall that Elena Dawson (Brytni Sarpy) saw right through Nate’s standing up for Amanda and knew he was attracted to and interested in the attorney; she did her best to try to warn him away from who she considers to be a fake, a fraud, and a thief who will only either take Nate for all the money he has or worse.

Nate defended Amanda, citing that she saved his medical license, but Elena was having none of it. After all, there were plenty of real, honest attorneys in Genoa City who could have done that – why go to this scammer? She was having none of it when he told her that Amanda herself had been scammed or she never would have taken the will challenge case. 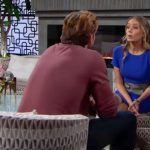 Elena will be proven right – not about Amanda’s character, but about Nate’s interest in her! Amanda is an attractive woman, once Hilary Hamilton’s (Mishael Morgan) old friends and family can get past Amanda’s doppelganger like appearance! Eventually, it may come out that Amanda is Hilary’s identical twin, separated at birth, but for now, people just have to try to look past her face and look at her!

‘The Young and the Restless’ Spoilers: Billy’s Troubles Aren’t Over – Amanda Here To Stay https://t.co/n4UfnnOWTV pic.twitter.com/wbiJOX6FmE

Not everyone in Genoa City is suspicious of Amanda because of her resemblance to Hilary – Billy Abbott, (Jason Thompson) for instance. When they met on the night of the storm, he was just like, ok, yes he did know Hilary but that in his past. He knew Amanda was Amanda and her resemblance to Hilary was just a coincidence unless they were twins separated at birth! He didn’t make a big deal about it and Amanda really appreciated that he didn’t!

Nate is a little bit by his lonesome since he and Abby Newman (Melissa Ordway) spilt up; sometimes it is difficult for a doctor who at times has to work odd hours to maintain a relationship, even though he is Victor Newman’s (Eric Braeden) personal physician, he works at the hospital at times as well.

However, he seems to see much more romantic potential in Amanda than he ever did in Abby, because Abby and he just were from two different worlds and were too dissimilar in their attitudes and morality to stay together. It was the last straw when he almost lost his medical license having helped Victor fake his death, and that is why he hired Amanda and gave her a chance – and she won the case against the medical board and became a good friend as well. Now it’s time to start romancing the beautiful young attorney – will she respond in kind?