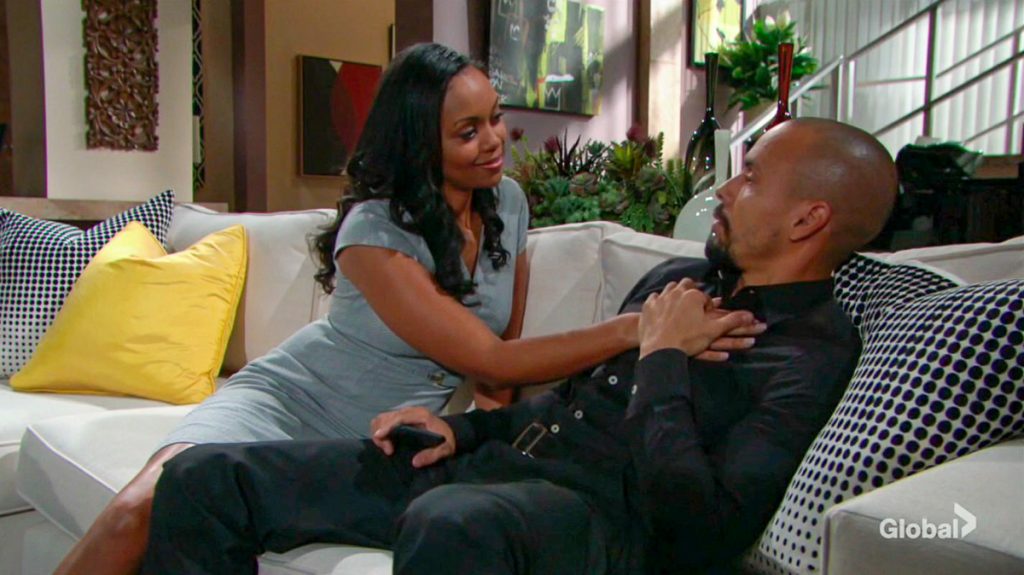 The Young and the Restless (Y&R) spoilers for Wednesday, December 4, tease that several Genoa City residents will struggle with secrets. Before we dive in, we should point out that impeachment hearings coverage will continue. Wednesday’s episode could be preempted, which might bump it to Thursday instead. Y&R will make an official announcement at some point, so just prepare for the possibility.

Y&R Spoilers: Billy Abbott And Victoria Newman Discuss Their Night In The Storm

Now let’s talk about all the action happening in GC. For starters, Billy Abbott (Jason Thompson) and Victoria Newman (Amelia Heinle) discuss their night in the storm. Victoria mentions getting trapped in her office, and Billy notes that he was out getting a drink. Afterward, Billy ponders why he felt the need to keep the full story a secret. He doesn’t understand why he’s hiding things for no reason and battling guilt.

Billy also makes a to-do list, which includes picking up the kids, calling Jack Abbott (Peter Bergman) about dinner plans as well as figuring out who he is and what he wants. Once Billy mulls over the list for a moment, he deletes it and takes off.

At Society, Nate Hastings (Sean Dominic) joins Amanda, who’s apologetic about him facing backlash for spending time with her. They talk about Devon Hamilton (Bryton James) and Elena Dawson (Brytni Sarpy), but Amanda suggests more than just the case is driving the hostility. Nate flirts with Amanda a little before he heads on his way.

After Amanda approaches the bar, Billy enters and cracks a few jokes with her. They share another nice conversation before Billy’s summoned to pick up Katie Abbott (Sienna Mercuri). Amanda seems pleased by their latest encounter after Billy heads out.

At Devon’s penthouse, he’s been dealing with a crisis for Tucker McCall’s (Stephen Nichols) staff. Devon was up half the night, but he still wants to head into work. Elena’s worried about Devon burning out. Devon also mentions Cane Ashby (Daniel Goddard) offering to return the money he set up in trusts for the twins. He refuses to accept that offer, and Amanda steers the conversation to their romance. She feels like their relationship has suffered due to how busy Devon’s been.

Devon and Elena make plans to discuss the issue later, so she ends up talking to Nate at the coffeehouse. Elena doesn’t approve of Nate being so protective of Amanda, but he can’t understand why Elena won’t give Amanda a chance. She confesses she wants Amanda away from Devon since she’s a constant reminder of what he’s lost.

Y&R Spoilers: Devon Hamilton Gets A Call From Cane Ashby

Back with Devon, he gets a call from Cane. They have a conversation about Colin Atkinson (Tristan Rogers), who seems to be paying people to offer phony leads. After Devon hangs up and drifts off to sleep, he dreams Hilary Hamilton (Mishael Morgan) is on the sofa with him. A confused Devon tells Hilary that there was an accident and Hilary didn’t survive it. Hilary thinks that sounds like quite a nightmare. She kisses Devon, who pulls back and sees Amanda before he wakes up.

Devon later phones Elena, who meets up with him at Society for lunch. He assures Elena that she’s his priority, which leaves her grinning. At the Grand Phoenix, Victoria pays Abby Newman (Melissa Ordway) a visit and gives her a pep talk. She thinks Abby needs to break this unlucky streak, but she believes her sister is meant for the hospitality industry.

Victoria is pleased about being the CEO of Newman Enterprises, but it’s been tough to juggle her time with Billy. Abby suggests Victoria needs to carve out that time. Victoria promises she will at some point and reconvenes with Billy at home. He tells her his day was good when she asks, but she has to dash off.

At Crimson Lights, Summer Newman (Hunter King) mistakenly assumes Theo Vanderway (Tyler Johnson) wants her to live with him. He clarifies that he’s just talking about getting a more permanent place of his own with more closet space. However, Theo does wonder if it’s something Summer’s though about. She doesn’t seem enthused, so Theo looks lost in thought after she leaves.

At Jabot later, Theo catches Summer off guard by suggesting they should both take a step back. She’s floored by the sudden breakup, but Theo thinks it’d be smart to have some professional distance. He contends that they only talk about surface stuff; there’s no depth to their conversations. Summer acknowledges that it’d be a smart move for Theo career-wise, but she’s irked when sneaks in a Kyle Abbott (Michael Mealor) mention.

The Young and the Restless spoilers say there are more twists and turns ahead, so Summer could be thrown a few more curveballs soon. We’ll give you updates as other Y&R news and rumors emerge. Stay tuned to see what else is ahead on the CBS soap.

General Hospital Spoilers: Nina Tries To Defend Valentin – Does She Have A Valid Argument?