The Young and the Restless spoilers tease that Mark Grossman’s (Adam Newman) video message, via Y&R’s Facebook page, implies that his character will seek a revival of the Shadam romance. Speaking directly to fans as himself, Grossman noted that his favorite place to be in Genoa City was in Sharon Newman’s (Sharon Case) home.

The original Shadam had Sharon and Adam, as then played by Michael Muhney, form a dynamic pairing. The start of their connection wasn’t always great, however, which was also later true of Chadam.

In a twisted effort to make amends to Ashley Abbott (Eileen Davidson), who Adam diabolically haunted, newly born Faith Newman (as now played by Alyvia Alyn Lind) was stolen from Sharon at birth. Adam gave Faith to Ashley, as though she were her just-born daughter.

Adam later told Sharon the truth in New Orleans, but a minor accident caused her to forget that information. That setting proved to be memorable, including vivid scenes that included the famous above ground graves in The Big Easy.

Young And The Restless News: Eric Braeden Opens Up About Losing Kristoff St. John And The Show’s Changes https://t.co/SgApUnd2Cp pic.twitter.com/mw65OyA0El

As longtime Y&R fans will recall, Adam rescued Sharon from the fire she set at the Newman Ranch. He also got her help for her then diagnosed bi-polar disorder. Sharon relayed this part of their backstory to him and appeared to earn his trust as a result.

This week’s scene showing Adam sending a text, which read that all is going smoothly in GC, could be ominous. Or possibly it is just part of this returned character’s current reality.

Is it possible Adam actually doesn’t recall his life before the cabin blast and that he is still suffering from amnesia? Then again, as Nick Newman (Joshua Morrow) and Vickie Newman (Amelia Heinle) suspect, their returned brother could be faking.

Young And The Restless Spoilers – Who Sent The Text?

The text could also have been sent to Riza Thomas (Tina Casciani), simply to let her know that he’s okay. That would make sense, as would Adam having taken the bag of cash from Las Vegas.

Anyone in Adam’s position would be suspicious of life in general, let alone a new group of people who claim to be family. He could be averse to keeping his seeming poker winnings far from reach, having the cash serve as a security blanket in case he needs it for whatever reason. 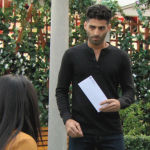 Sharon told Nick she’s convinced Adam isn’t attempting to pull one over on them. Since Grossman’s character is forming a bond with her, Sharon could be the one to blow his cover if Adam slips.

Soap Opera Spy is a leading source for everything linked to the Young and the Restless. Check back regularly for Y&R spoilers and news!

MUST WATCH General Hospital Preview Video Wednesday, May 22: Willow Terrified, Shiloh Gets In Her Face and Rages About His Baby