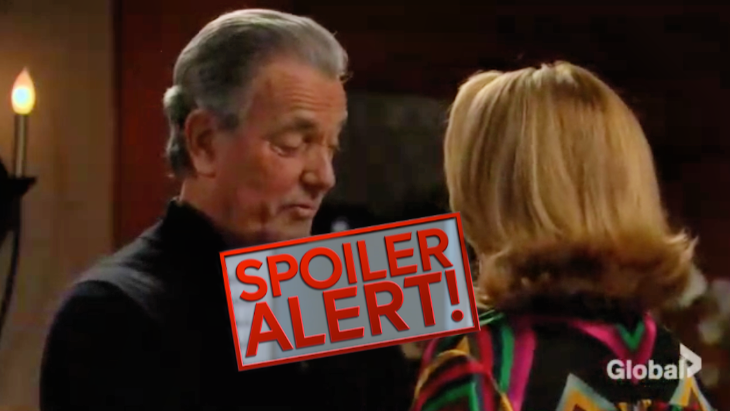 “Young and the Restless” spoilers for Friday, January 18, tease that Victor Newman (Eric Braeden) will catch Nikki Newman (Melody Thomas Scott) off guard. At the ranch, Nikki’s bullet misses Victor as he walks in. He’s grateful that Nikki’s a terrible shot. Victor explains that his bail hearing was moved up, so he thought he’d come home and surprise her.

Nikki takes a look at Victor’s ankle bracelet, which he’ll be sporting during his house arrest. She hopes Victor can play by the rules. Victor’s priority is protecting Nikki, so he wants to figure out a way to do that. Meanwhile, someone continues monitoring the home through surveillance video.

At the coffeehouse, Mariah Copeland (Camryn Grimes) and Nick Newman (Joshua Morrow) are in agreement on Victor’s innocence. Nick’s puzzled by the way Mariah’s defending him, so she suggests Victor would rather see J.T. Hellstrom (Thad Luckinbill) suffer. Murder would be too easy and isn’t Victor’s style. Nick seems to buy it and is thankful GC Buzz will be backing off the story.

At the Abbott mansion, Kyle Abbott (Michael Mealor) treats Lola Rosales (Sasha Calle) to a romantic evening. They look at the constellations outside and Kyle alludes to their star. Inside, Kyle shows Lola what he means. He hands over paperwork that shows he bought them a star and named it “Kola.” Kyle promises it was only $19.95, so it was just a sweet, inexpensive present for the lovely lady in his life.

Lola enjoys their evening and Kyle does as well, but there’s one problem. Kyle’s face shows signs of frustration after their kisses turn increasingly passionate. It’s clear that Kyle’s ready to take this relationship for the next level, but Lola just isn’t ready for that step yet.

Sparks fly between Cane and Victoria today on #YR. pic.twitter.com/xXOfK9WYG7

Once Cane exits, Billy turns his attention to Victoria. He feels like Phyllis Summers (Gina Tognoni) brought all this on by planting the rebound idea. Billy assures Victoria she isn’t one. He also indicates that he’s done a lot worse than this, so it’s not like he’s in the position to judge. Victoria thinks that’s good since she doesn’t owe Billy an explanation. It’s not like they’ve made their relationship official.

During the shouting match, Victoria reveals that she kissed Cane another time, too. She feels like Billy just needs to leave. Victoria ends up heading over to the ranch, where Nick has joined Victor and Nikki. Victor wants to destroy the evidence that could point to Nikki’s guilt, but she’s against it. Nikki intends to keep the proof in case they have to clear Victor later.

So true it’s impossible to not think of #YR without Victor. Keep it up! #YR pic.twitter.com/bIkx3MdR9S

Victor speaks with Nick privately about what they’re up against. He can’t go past the ranch perimeter, so he’s relying on Nick to be his man on the outside. Back with Victoria, she talks to Nikki about her Billy drama. Victoria’s emotions are all jumbled, so she isn’t certain of what she wants anymore.

At Devon Hamilton’s (Bryton James) penthouse, a freaked Cane appears and pleads to use the jet. He’s desperate to save his marriage, so Devon wonders what happened. After Cane rambles a bit, he confesses to kissing Victoria. Cane feels terribly guilty, so he’s determined to come clean to his wife.

Devon suggests that would be selfish. Cane would just be trying to make himself feel better and Lily would feel worse. Devon believes it’d be better for Lily to feel supported by her husband, no matter what’s going on back home.

In prison, a vengeful Billy arrives for a visit with Lily. “The Young and the Restless” spoilers hint that Billy’s loose lips could spell big trouble! We’ll give you updates as other Y&R news and rumors emerge. Stay tuned to see what’s next in Genoa City.