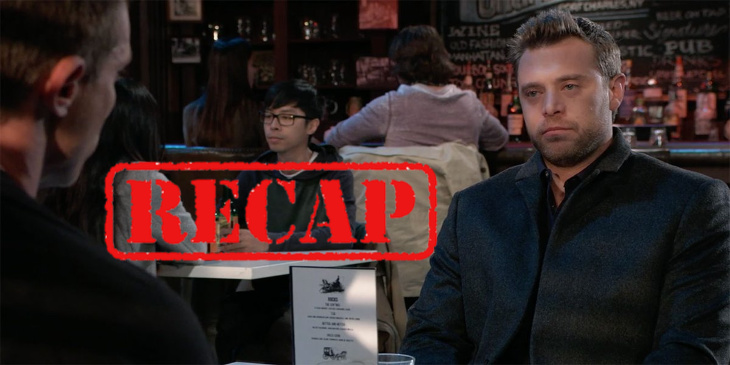 General Hospital (GH) recap for Thursday, January 17, 2019 reveals Alexis (Nancy Lee Grahn) is given a room at the hospital to read Gail’s (Susan Brown) will. Monica (Leslie Charleston), Laura (Genie Frances), and Scott (Kin Shriner) are there for the reading of the will.

Scott is representing Lucy (Lynn Herring) and his daughter; Laura is representing her mom. Person items are to be handled by someone else. Gail has left an endowment for mental health care at the hospital, but there are certain criteria that she wants the hospital to meet. Alexis says everyone will be summoned back at another time to learn what these stipulations are.

General Hospital’s Anna (Finola Hughes) is walking the halls and wants to see the sunset. Finn (Michael Easton) catches Anna and asks what she is doing out of bed. Anna is going stir crazy and wants to see the sunset. Finn goes to put away a file and tells Anna to stay where she is. Anna is afraid to lay down because she’s afraid to wake up blind again.

Finn has some answers about Anna's abrupt blindness, West Coast. What can they learn from other victims of the rare virus? #GH55
Tune into a dramatic, new #GH – STARTING NOW on ABC! @finolahughes pic.twitter.com/Gy80ymOxAM

Anna asks if Finn found out anything about the virus in his research. Finn tells Anna that he knows who the first person to contracted that virus. Finn gives Anna the name of this person, and she recognizes it. Arthur Cavot worked with the DVX. Anna says Faison (ex-Anders Hove) was tied in with the mind control department, so her exposure to this virus isn’t that far fetched.

General Hospital’s Nina (Michelle Stafford) and Valentin (James Patrick Stuart) are setting up for the book signing. Valentin talks about the earthquake. Nina tells Valentin she wants to join the school board to have authority over Willow (Katelyn MacMullen). Nina speaks to Willow, Valentin is proud she’s nice to her enemy. Valentin tells Nina that being nice is a good strategy.

Nina doesn’t want to deal with Willow. Nina says Willow treats her as someone who has no role in Charlotte’s (Scarlett Fernandez) life. Valentin says they can fix that and asks Nina to marry him again. Willow and Lulu (Emme Rylan) have a drink together before the signing. Willow wants to have another conference with Lulu over Charlotte’s behavior. Willow tells Lulu the problem this time isn’t Aiden (Jason David). Willow and Lulu want to speak to Valentin about Charlotte.

Valentin proves to be distracting as Nina preps for the launch of Lucy's book. What's he up to today? @japastu
A shocking, new #GH starts RIGHT NOW on ABC! @TheRealStafford #GH55 pic.twitter.com/oKwLAFaT9p

Valentin says they can talk now. Willow says Charlotte hates history and is cheating off her friend. Willow explains that she changed the seating arrangement and the two girls have the same answers, right or wrong. Nina accuses the other girl of cheating, and Lulu tells her no, Charlotte is the one cheating. Willow explains that Charlotte’s friend has had consistent scores, but Charlotte hasn’t. Willow offers to tutor Charlotte, Nina doesn’t want that. Valentin assures Willow that he is studying with Charlotte. Willow thinks that Charlotte is acting out because of how things are going in her home life. Valentin comments on Nina referring to Charlotte as her stepdaughter and how that means she still considers him to be her husband.

General Hospital’s Cameron (William Lipton) is picking up garbage and Lulu, and Laura asks how he’s doing. Laura commends Cameron on taking responsibility for his mistake. Jocelyn (Eden McCoy) and Oscar (Garren Stitt) join him and tell him they are planning their future. Cameron doesn’t have to plan out his future because it is mapped out for him. Cameron has to work another hour and then go home and write an essay to his counselor. Jocelyn and Oscar tell him they want to do as much as they can in the time they have.

Lulu and Laura make plans to meet at the book launching later. Oscar and Jocelyn are going to hit all the high points of Port Charles while they can. Cameron and Jocelyn talk about cookies. Jocelyn wants to take Oscar to Ekerts for sugar cookies. Oscar wants to check out the catacombs as well. Cameron tells Jocelyn and Oscar that some kids at school found a way into the catacombs and Oscar wants to know how they can get there.

General Hospital’s Sam (Kelly Monaco) and Jason (Steve Burton) are having a beer. Sam is going to a seminar with Dawn of Day. Jason asks Sam if she needs a shot of tequila first, Sam declines. Sam doesn’t want to go to the seminar, but it is getting her closer to Shiloh (Coby Ryan McLaughlin). Jason thinks that is what Shiloh wants. Jason wants to go with Sam; she tells him she’s doing this alone. Jason says she knows Shiloh gets people when they are vulnerable and gets them to do what he wants.

Sam says she’s not vulnerable, Jason says she is. Jason is afraid Shiloh will use her past against her. Jason says the seminars are open to everyone. Sam tells Jason that everyone will be on edge with him there and no one will open up to her. Sam arrives at the meeting, and Kristina welcomes her. Shiloh asks Daisy (Kelsey Wang) to assist him and asks for someone to share a painful memory. Shiloh has people come up to him and thank about the memory that is bothering them.

Sam gets more than she bargained for at the Dawn of Day house. But is it helping Kristina heal? #GH is brand-new and STARTS NOW on ABC! #GH55 pic.twitter.com/gGuftOm4oE

Daisy asks questions about the memory. Kristina tells about Keifer (ex-Christian Alexander) beating her at Alexis’ house. Daisy leads Kristina into agreeing that she was glad Keifer was jealous but liked that he was paying attention to her. Sam stops Daisy and defends her sister. Kristina gets upset with Sam because she says reliving this is helping her heal. Shiloh says Sam’s reaction means she is dealing with something in her own life. Sam apologizes to Kristina for embarrassing her. Sam asks what qualifies Shiloh to run this group. Sam leaves promising to be back.

General Hospital’s Drew (Billy Miller) text Jason and wanted to meet. Drew asks if Jason has heard about Oscar, he has and is sorry. Drew wants Jason’s help dealing with helping Jocelyn handle his death. Drew is afraid that Jocelyn will try and encourage Oscar to try and look for a clue that doesn’t exist. Drew wants Jason to talk to Carly (Laura Wright) and have her explain to Jocelyn why they don’t want to give Oscar false hope. Drew is afraid that Jocelyn will make things worse for Oscar without meaning to. Jason tells Drew that Jocelyn will fight to make things the best they can be for Oscar.