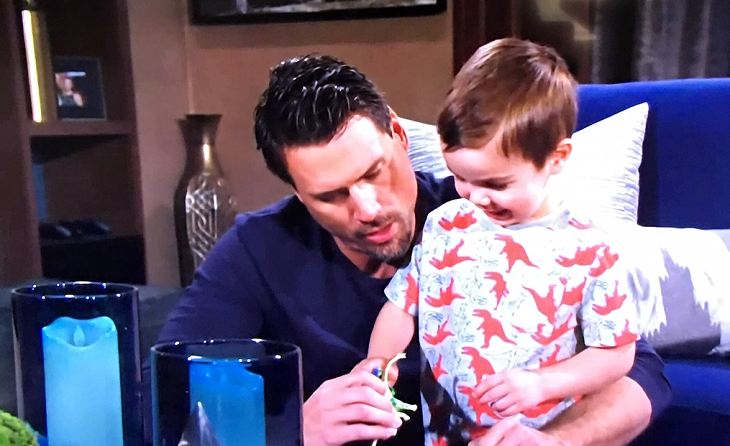 The Young and the Restless rumors indicate that a custody battle over Christian Newman (Jamie and Alister Tobias) will divide the Newman family.

This week The Newmans, along with the rest of Genoa City, will be rocked by the return of Adam Newman (Mark Grossman). As Y&R viewers will remember, the last time we saw Adam he was killed in a cabin explosion. He survived the explosion and his father Victor Newman (Eric Braeden) discovered he’s alive and has tracked him down to Las Vegas.

Victor brings his son back to Genoa City because he wants all of his family together. However, Adam’s return is going to cause a lot of drama for the family, especially for his brother Nick Newman (Joshua Morrow).

The relationship between Adam and the rest of the family has always been hostile. Adam felt like the black sheep of the family, always looked down upon. His rivalry with Nick has been one of the core focuses of the show throughout the years.

Now, their rivalry is going to heat up once again when Adam sues for custody of Christian.

As fans know, Adam is Christian’s biological father and the boy’s mother is Nick’s ex-wife Sage Warner (Kelly Sullivan). Adam knew he was Christian’s father, but hid the truth so that Sage and Nick could raise the baby together.

Shortly after Adam’s death, the truth of Christian’s paternity was revealed. Nick was devastated, but continued raising the boy as his own. Now, he may lose the boy in an ugly custody battle that will have everyone choosing sides.

Young And The Restless Spoilers – Who Will Victor Newman Support?

Nick will have the support of his mother Nikki Newman (Melody Thomas Scott) and his sister Victoria Newman (Amelia Heinle). But when it comes to Victor, there’s no telling where support will go.

Victor has had difficult relationships with both his sons in the past. Often the Newman patriarch has pitted his children against each other. This time with Christian’s future at stack, Victor will have to decide which son he’ll support.

No matter which side he chooses, Victor is going to lose one son in the process, plus it may also upset the rest of the Newman clan.