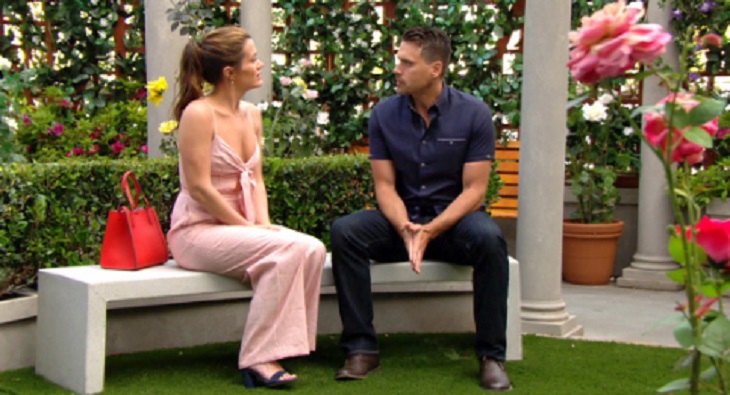 Chelsea Boudreau (Melissa Claire Egan) told Adam Newman (Mark Grossman)  twice on ‘The Young and the Restless’. Pair that with Nick Newman’s (Joshua Morrow) predicament and it appears that he and Chelsea will share a common interest in opposing Adam’s desire to be with his sons.

In the matter of weeks, Adam regained his memory. But along with that redux has come a realization. He’s without the love of his life and both of his offspring.

Chelsea’s return to Genoa City, Wisconsin, was a surprise. Adam knew she’d gotten remarried. But his attempts to contact her directly, combined with Nick’s response to the texts she sent him in recent months caused Chelsea to visit to the fictional setting that was once her home. Visit being used purposefully because she doesn’t intend to stay.

Young And The Restless Spoilers – Adam And Nick Battle Over Christian

Grossman’s character is already embroiled in a coming custody battle with Nick for the son (Christian) he (Adam) had with Sage Newman (Kelly Sullivan). Considering that Chelsea has basically taken the same stance as Nick, in not wanting Adam to have access to his son (Connor), Y&R fans would be right to believe that legal sides will soon be chosen.

While Adam appears to have a somewhat strong case regarding both of his boys, the power of Chelsea’s testimony can’t be underplayed. She was the direct witness to how Adam interacted with Connor and knows that her former husband wanted Nick to believe he was Christian’s father.

In both instances, how could any judge block Adam from at least having visitation rights, if not more than that? Following through, what grounds do Nick, or Chelsea have in wanting to deny Adam contact with his biological children?

Young And The Restless Spoilers – Chelsea Newman Is Single Again

Buzz about Calvin Boudreau’s (John Burke) quick demise would make Chelsea single. But that won’t necessarily mean that ‘Chadam’ will instantly reunite with their son. As to the connected issue of Christian’s custody, Adam’s isolation will surely propel Y&R’s newest leading man to fight for his family.