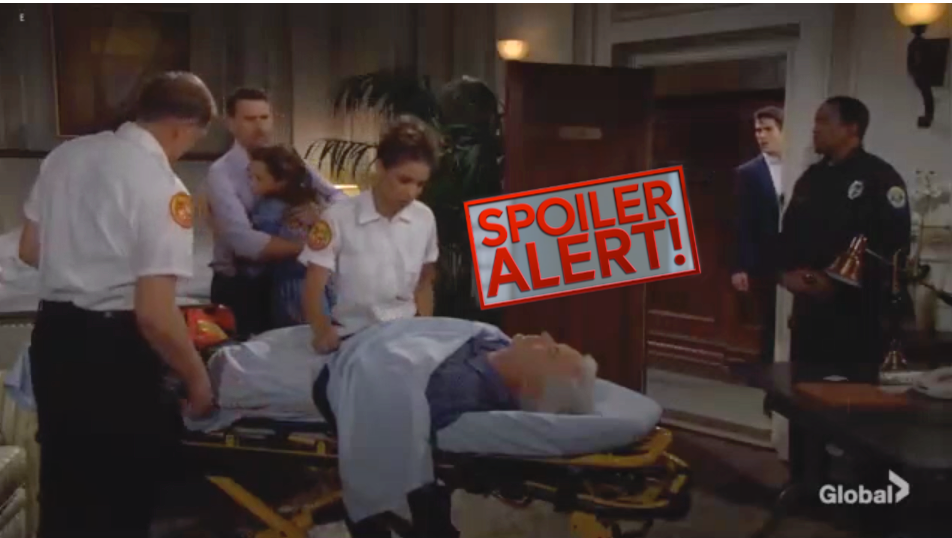 The Young and the Restless spoilers for Friday, July 5, tease that Billy Abbott (Jason Thompson) will arrive at Newman Enterprises to see Victoria Newman (Amelia Heinle) – she forgot they were supposed to meet for his birthday. She’ll share with him that she persuaded the tenant of a Dark Horse owned building to move into a Newman owned building. Billy will be impressed.

Meanwhile, in their hotel room, Calvin Boudreau (John Burke) will tell Chelsea Newman (Melissa Claire Egan) that he went to see Adam Newman (Mark Grossman) because he feels for Adam. He’ll say that Connor Newman (Gunner and Ryder Gadbois) should be with Adam. Chelsea will be stunned.

Young and The Restless Spoilers: Adam Newman Toasts To Being An Outcast

Next on Y&R, Adam will return home to find Phyllis Summers (Michelle Stafford) drinking by herself. Phyllis will want to draw focus away from her failed party and to the hotel they’re going to open. Adam will toast to them being outcasts. Later, Phyllis will leave, and Adam will get a text from Kevin Fisher (Greg Rikaart) saying that Chelsea is with an old guy.

Meanwhile, at Devon Hamilton’s (Bryton James) penthouse, Ana Hamilton (Loren Lott) will show Elena Dawson (Brytni Sarpy) and Devon the video of Tessa Porter (Cait Fairbanks). Elena will like it, but Devon will complain about the sound not being good. He won’t like it that Ana did this while he was distracted and will say that she’s not ready to do this on her own.

Next on Y&R, Summer Newman (Hunter King) and Nick Newman (Joshua Morrow) will catch up about Phyllis’ new attitude and about Summer’s recent debacle with Theo Vanderway (Tyler Johnson). Nick will get Summer up to speed about Chelsea being back in the picture as well.

At Society, Devon and Elena will chat, and then Theo will arrive. Devon and Theo will have business to discuss, and they’ll discuss music and Tessa’s video. Theo will agree that the sound on the video is muddled. Later, Ana will arrive, and Devon will tell her that he’s bringing someone in to mentor her – he’ll point to Theo.

Ana will immediately be offended by the move, but the three of them will talk, but Ana will still be skeptical of the arrangement. After all, Theo is a professional party boy. But after Devon leaves, Theo will say that he just wants to help Ana succeed, and Ana will give in.

Next on Y&R, Billy and Victoria will enjoy the Genoa City carnival together. They’ll hit the shooting range, and Billy will flash back to when he took the hidden gun at the Abbott estate, and to when Adam showed up at Delia Abbott’s (Sophie Pollono) gravesite.

Young and The Restless Spoilers: EMT’s were called

Also at the carnival, Adam will get a text from Kevin that EMTs were just called to the GCAC.

Meanwhile, at Nick’s house, Summer will see a social media post of Theo at Society and will head over there – she’ll arrive just in time to see Theo and Ana toasting.

Finally, on Friday’s new episode of Y&R, Nick will get a call from a frantic Chelsea, who will tell Nick that Calvin is dead. Nick will rush to Chelsea’s hotel room, where he’ll find her and take her in his arms. Adam will then show up, followed by Phyllis who won’t be able to help herself from telling Adam, “Oh, man, tough break.”

Be sure to tune in on Friday to catch up on everything happening on Y&R right now.

The Young and the Restless Rumor: Nikki Killed Delia – Not Adam Newman?