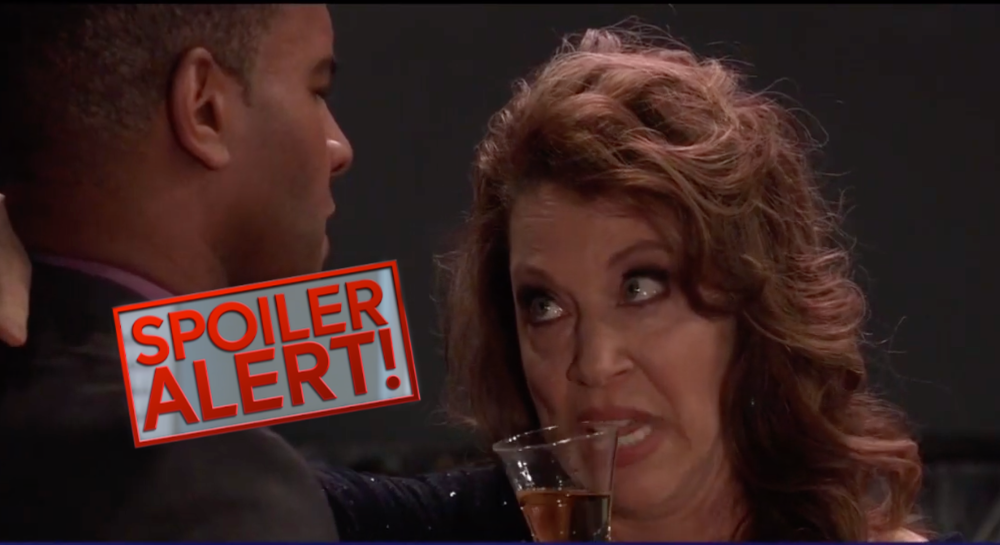 General Hospital spoilers tease that Monday, July 8th’s episode of General Hospital will be an episode with many secrets starting to be revealed and dramatic scenes as a result!

First, the wedding celebration for Franco and Elizabeth Baldwin (Roger Howarth, Rebecca Herbst) has begun, and Curtis Ashford (Donnell Turner) is onboard the Haunted Star as he calls Valentin Cassadine (James Patrick Stuart) with an update. He tells him that Jasper Jacks (Ingo Rademacher) has a file on him!

Elsewhere on the Haunted Star, Bobbie Spencer (Jacklyn Zeman) fusses at Julian Jerome (William DeVry), undoubtedly about the custody case Shiloh Archer (Coby Ryan McLaughlin) has started to take Wiley Cooper-Jones (Eric and Theodore) away from Lucas Jones (Ryan Carnes) and his husband Brad Cooper (Parry Shen). She lays into him and asks him what good has his help ever done anyone?!

Meanwhile, back at Port Charles Ava Jerome (Maura West) is sitting in a restaurant talking to a psychic (Veronica Cartwright). The psychic, who Ava is said to have known previously, may be having a hard time staying on task as Ava reminds her that she’s there to talk about her late daughter Kiki Jerome (Hayley Erin), not catch up on old times or something like that!

Back on the Haunted Star, a worried Brad Cooper is now talking to Julian Jerome, updating him that Shiloh Archer now thinks that he is the father little Wiley (Eric and Theodore)! As General Hospital viewers know, Shiloh is in for a big shock and so is Willow Tait (Katelyn MacMullen)! There doesn’t seem to be a way to get ahead of this since no one knows that Shiloh is getting a DNA test to compare to Wiley’s, thanks to Shiloh’s theft of a burp cloth from Brad and Wiley the last time they ran into each other at Charlie’s Pub!

Elsewhere on the Haunted Star, a tipsy Liesl Obrecht (Kathleen Gati) looks like she’s going to spill a big secret to Felix DuBois (Marc Samuel) as she seems to be talking about Brad and Lucas’ marriage and Wiley really being Jonah Corinthos, since she tells Felix “that marriage is not built to last!” Other General Hospital spoilers tease that she’ll confide something in Franco, maybe it’s another secret about something else!