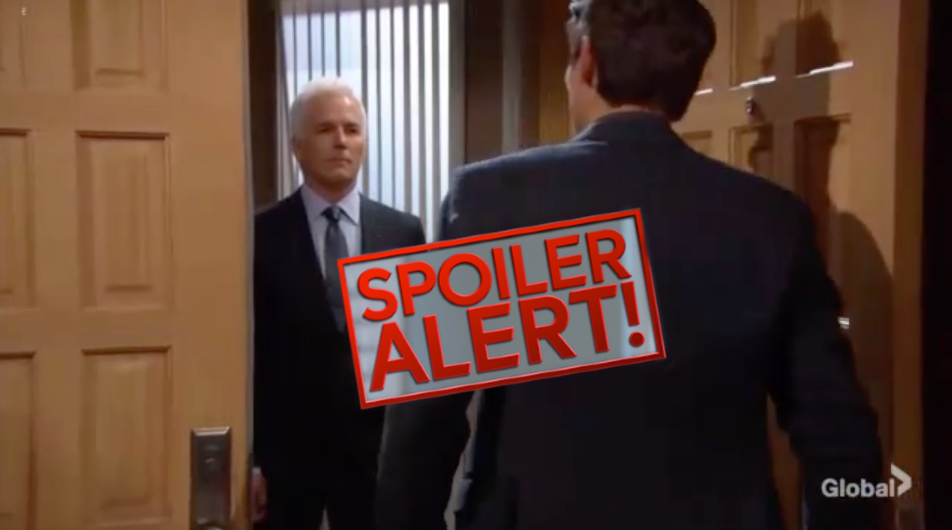 The Young and the Restless spoilers for Tuesday, July 2, tease that Chelsea Newman (Melissa Claire Egan) will be in Chancellor Park when she senses Nick Newman (Joshua Morrow) is following her. She’ll call out to him, and he’ll come out from the bushes. They’ll discuss Adam Newman (Mark Grossman) and Chelsea’s recent conversation with him.

They’ll also address how Chelsea hurt Nick, and Chelsea will apologize for her actions. They’ll reach an understanding, and when Chelsea mentions Christian Newman (Jamie and Alister Tobias), Nick will invite her to see him.

Phyllis will be suspicious about why Kevin would do Adam’s bidding, but Adam won’t tell Phyllis what he has over Kevin. Then Phyllis will tell Adam that he’s hosting a gathering at his penthouse tonight before leaving a message for Summer Newman (Hunter King).

Next on Y&R, at Society, Kyle Abbott (Michael Mealor) will be worried about making a good impression on Celeste Rosales (Eva LaRue). Lola Rosales (Sasha Calle) will try to reassure him, and things will go pretty well once Celeste arrives and meets Kyle. But then things will take a turn when Celeste insists on staying at “Lola’s” apartment.

Celeste clearly won’t know that Lola and Kyle are living together, and she won’t take the hint when Kyle tries to convince her to stay at the GCAC instead. Lola will give Kyle “her” keys and he’ll go to their apartment to “get things ready.”

Next, on Y&R, Summer and Theo Vanderway (Tyler Johnson) will enjoy the Genoa City carnival, as Summer gripes about Lola’s bridal shower. Summer will get and delete messages from both Phyllis and Billy Abbott (Jason Thompson). Later, Nick and Christian will meet Chelsea there, and Christian will remember Connor Newman (Gunner and Ryder Gadbois) and his mommy. They’ll chat a bit, and Nick will invite Chelsea to his house.

Meanwhile, at Lola and Kyle’s apartment, Kyle will get Mariah Copeland’s (Camryn Grimes) help to remove everything “masculine” from the place. Then Celeste and Lola will arrive, and Celeste will let them know that she’ll be staying with Lola until the wedding and that she wants to help plan the wedding.

Next on Y&R, at Adam’s penthouse, he’ll tell Kevin that Chelsea’s in town and that his job is to follow her and find out the name of Connor’s summer camp. Kevin will balk at the idea, but Adam will insist or else he’ll have Chloe Mitchell (Elizabeth Hendrickson) locked up.

Later, Adam will answer the door to find Chelsea’s husband Calvin Boudreau (John Burke) there. Calvin will tell Adam that he wants to talk.

Finally, Nick and Chelsea will talk at Nick’s place. Nick will suggest that they team up to stop Adam from taking their children away from them. Chelsea will mention her husband Calvin, who knows about some of her past, and she’ll state that she won’t be staying in Genoa City. Then Nick will ask her out for dinner, and she’ll say she’s free.