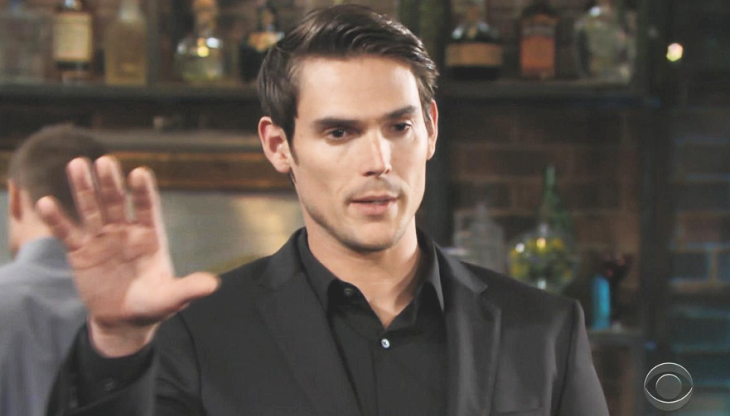 Adam Newman (Mark Grossman) has no trusted family members, or friends on the Young and the Restless. That makes sense considering what’s happened in this character’s life. But here’s hoping Y&R soon lightens Adam up.

Every comeback is ripe for critique. Sprinkle in the wrinkle of a recast, with a dash of reverse SORAS, and the perfect soapy soup was set to boil on this classic steamer.

Soap operas are deeply subjective. Voluminous scenes affords fans the opportunity for many takes at all of the many fictional personalities. When considering Adam, some opinions are steeped in the past, others are choosing to see the here and now, and a certain contingent is standing between both worlds.

This take sees Grossman as solid in delivering the hard-written angle of this character. Very few glimpses of Adam’s vulnerability have been presented to-date.

A handful of moments with Sharon Newman (Sharon Case), a few with Chelsea Boudreau (Melissa Claire Egan), and a man-up moment with Victor Newman (Eric Braeden), when Adam was disguising concern about his father’s serious blood disease diagnosis, along with some micro moments that allow viewers to see this man’s soul. But mostly everything else sports his mean side.

Of course Adam’s desire to see Connor Newman (Gunner and Ryder Gadbois) makes sense. He’s been unable to make contact with his son since the time period just prior to the cabin blast. Losing those three years, during a crucial time in Connor’s life, hit Adam hard. But he thought a reconciliation with Chelsea was coming. Now, it’s not.

Young And The Restless Spoilers – May Regain Custody Of Christian

Nick Newman (Joshua Morrow) is right to be saying that Adam has handled his re-introduction to Christian Newman (Jude and Ozzy McGuigen) all wrong. With a bribe of the custody judge planned, Adam may gain full custody of his second-born son. However, Kevin Fisher (Greg Rikaart) might not allow that to happen.

Anyone can claim the right to express an opinion about this daytime soap and its Adam recast. That’s what this column is, more or less. But it’s too soon to tell if this is all that Grossman’s version of the classic character will ever be.

Give the character and the actor more time. Reviewing a larger sample size, say by the fall, will allow Y&R’s writers to have fully presented Adam’s latest comeback from the presumed dead, for him to have acted on his defensive impulses and then to be course-correcting.

Young And The Restless Spoilers – Assessments Forming As Arc Plays Out

Young and the Restless #YR News: CBS Soap In Danger Of Going Off Air -Here's How You Can Help! @celebratesoaps https://t.co/mTzAHOt2qk

The suggestion here is that today’s Adam needs to be lightened up within the next two to three months. That may be the plan. Yes, as more arc plays out deeper assessments will be forming.