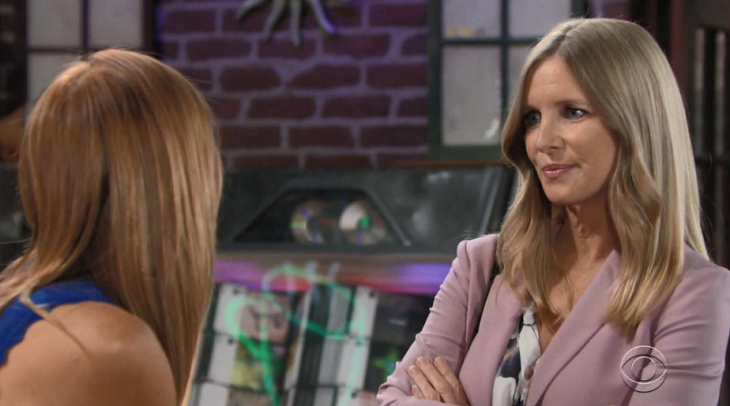 The Young and the Restless is revisiting another classic battle now that one of the show’s all-time favorite actors has returned. Yes, Phyllis Summers (as again played by Michelle Stafford) called Christine Williams (Lauralee Bell) Cricket and The Bug, signaling that this epic battle is back on.

Hardcore Y&R fans recall the arc that started it all. Phyllis was stalking Danny Romalotti (Michael Damian) while he was on tour. The rock star’s true love, Christine, was in Genoa City, Wisconsin. She was unaware of how her blissful life was about to change.

Phyllis conned Danny into believing that he was the father of her child, Daniel Romalotti (Michael Graziadei), when he wasn’t. It took awhile for that truth to be known, while forever altering the lives of all involved.

Daniel’s paternity didn’t impact Danny’s relationship with the boy he came to think of as his own. But Phyllis’ purposeful interference spelled the eventual end of Christine and Danny’s belief that they were destined to be together forever.

Digitally skipping ahead by many years, Phyllis became incensed with Christine and was plotting a way to end her life. Red actually got behind the wheel of a car, waited for Chris and Paul Williams (Doug Davidson) to walk into the street and ran them down.

That infamous hit and run incident never resulted in Phyllis being prosecuted. A lack of evidence couldn’t be provided to law enforcement. Christine attempted to force the truth out of Phyllis on various occasions through the years. She also referenced the event in July 2019, when Bell and Stafford had their first on-screen reconnection since Stafford returned to the cast, after recently leaving General Hospital.

Young And The Restless Spoilers – The Changing Roles In Genoa City

Stafford played Nina Reeves on that classic steamer since 2014, after departing Y&R on her own accord in 2013, with Gina Tognoni (Phyllis) then assuming the cast spot through this year.

Just as fan access to the daytime stars they love has changed, so too are the roles that Christine and Phyllis are playing in the summer of 2019. Victor Newman’s (Eric Braeden) public victory created Christine’s change of heart. She’s opting to not run for re-election and will therefore be ending her time as GC’s District Attorney.

Young And The Restless Spoilers – Phyllis Summers’ Phoenix Is Rising

Hopefully Y&R’s storyline that intertwines Bell and Stafford means that both great actors will continue their fictional character’s battle. So it’s not that Chris will become invisible, but instead may refocus her efforts on seeking justice in other forms.

Phyllis has returned from Las Vegas, Nevada, and now heads Adam Newman’s (Mark Grossman) Dark Horse real estate business, that he snatched from Nick Newman (Joshua Morrow). Phyllis just learned of Adam’s plans to buy the next DA. So it projects as possible that Christine’s current sway will stiffen. This means she’ll be using new tools to fight her longtime nemesis.