Days of Our Lives spoilers tease that Haley Chen (Thia Megia) will start having disturbing visions of Claire Brady (Olivia Rose Keegan), who nearly burned her up in a fire along with Tripp Dalton (Lucas Adams) in the Horton Cabin.

Days of Our Lives viewers will recall that when Haley and Tripp were rescued at the burning cabin by Eli Grant (Lamon Archey) and other first responders, Haley had suffered smoke inhalation. But other than a bump to the head when she had fallen, checked out okay at Salem University Hospital. However, Days of Our Lives spoilers say that she will have disturbing visions of Claire, not nightmares.

It would be perfectly understandable that Haley would have nightmares, in particular those where she may be choking to death or where she is trapped in flames with no way out! That is usually just the mind’s way of working out its troublesome memories. But when a person starts having visions when awake, or hallucinations of the trauma suffered, or portions of it, or other things related to the trauma, that can be a clear sign of Post Traumatic Stress Disorder!

Post Traumatic Stress Disorder, or PTSD as it is commonly called, can be very dangerous! Days of Our Lives viewers undoubtedly have heard stories of war veterans acting out their traumas, sometimes killing people, thinking they were the enemy that they once fought against in the war! 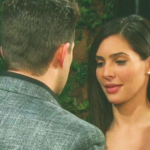 PTSD stories have been done on nearly every soap opera produced since the phenomenon was first described by sufferers and classified in the DSM, or Diagnostic and Statistical Manual of Mental Disorders, a desk reference used by psychologists and psychiatrists to diagnose and classify mental illnesses.

While PTSD is not actually classified as an illness, in the way schizophrenia or bipolar disorder is, it can still have devastating effects and consequences for the sufferer as well as their loved ones and friends! However, it is very common!

Mayor Jack Deveraux (Matthew Ashford) once suffered from PTSD. In a 2011 storyline, he had been working on a case about drug trafficking in Europe, which ended up with him tracing the source of the drugs to Afghanistan. He had lied to Jennifer and their children about where he was going, or they could have sent someone to rescue him; but they didn’t know where he really was! He wound up captured, and held prisoner and tortured.

By the time he returned to Salem, Jennifer had divorced him and moved on. Jennifer and the family didn’t trust him anymore because of his lies. But first, Jack needed to deal with his case of PTSD. And he did, in therapy with Dr. Marlena Evans (Deidre Hall) and a support group.

Is there still a connection between Haley and Tripp? 👀 #DAYS pic.twitter.com/1sghvvf0TF

It seems ironic that Haley may be suffering from the same thing that Jack was. After all, it was Jack who caused her troubles anyway. If he hadn’t divulged her immigration secret, she wouldn’t have gone on the run with JJ Deveraux (Casey Moss). She wouldn’t have hid out in the Horton Cabin with Tripp. And she wouldn’t have nearly been killed by Claire! Will Jack start redeeming himself by helping Haley work through her PTSD?