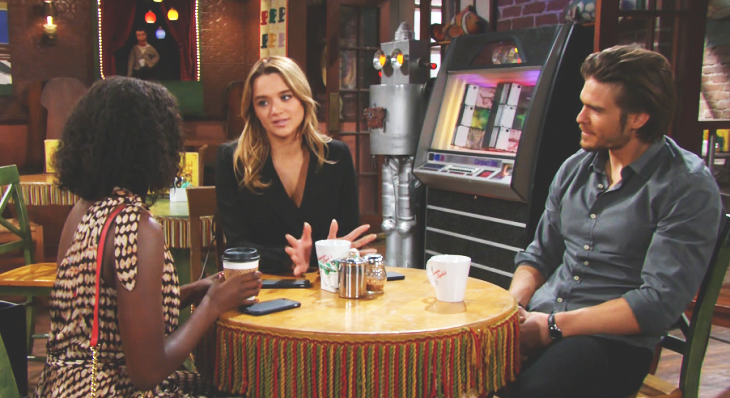 The Young and the Restless spoilers indicate that Theo Vanderway (Tyler Johnson) will begin a new relationship with Ana Hamilton (Loren Lott).

Theo has been hanging out with Summer Newman (Hunter King) a lot lately. The two have been hitting the clubs in Genoa City and it seemed that sparks were flying between them.

Viewers were excited about the new pairing, because Summer was going to find happiness after being dumped by Kyle Abbott (Michael Mealor). However, it appears that Theo and Summer’s budding relationship could be over.

Young And The Restless Spoilers – Work Relationship Leads To Romance?

The reason for their break up has to do with Summer’s obsession with Kyle and his fiancé Lola Rosales (Sasha Calle). Summer acts like it doesn’t bother her, but it does. Her constant talk of Kyle and Lola has annoyed Theo.

He likes Summer and wants her to give him a chance, but he knows that’s not going to happen. With Summer obsessing over Kyle, Theo is going to find another lady and that person could be his new employee, Ana.

Theo and Ana are going to be working together at Hamilton Winters, and as viewers know often a working relationship leads to a romantic one.

Young And The Restless Spoilers – Will He Give Her Another Chance?

Ana hasn’t had a love interest since arriving in Genoa City, but now it looks like Mr. Vanderway could become her boyfriend. While Theo and Ana grow closer, Summer is going to be keeping an eye on them.

Even though Summer is still reeling from her divorce from Kyle, she also realizes she needs to move on. She likes Theo and thought they had a connection, but seeing him with another woman is going to upset her.

These two are having some fun at the GC Carnival! #YR pic.twitter.com/2UgepKjX77

She knows she ruined things with Theo and wants to make them right. She believes that if given a second chance they could make their relationship work. The question is if Theo is willing to give her another chance. It looks like another love triangle could be in the works on Y&R and it has the potential to be a good storyline.

Now, it’s time for fans to choose sides in this triangle. Who do you think Theo should be with – Ana or Summer?