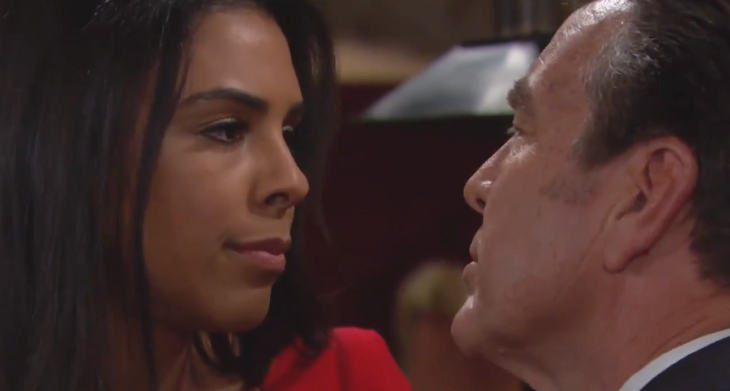 Alice Hunter’s (Kerry Johnson) surprise exit from the cast of ‘The Young and the Restless’ is understandably being linked to the stunning news that Thad Luckinbill (J.T.) recently rejoined the cast. Buzz is building toward what would be an epic storyline reveal twist.

If the above rumor proves true, Jack Abbott (Peter Bergman) will be devastated. He seemed to have finally found a woman of substance to build a life with. But based upon Johnson’s recent social media posts, where she advised that Kerry will earn her indefinite hiatus, fans could conclude that she’ll be leaving town in a rush, or possibly imprisoned for her involvement with the J.T. matter.

Savvy soap fans have learned how to cautiously read tea leaves. If Kerry is leaving and a dramatic exit is implied, then it could be possible that her egg-freezing attempt might be related to a pregnancy, with no J.T. link happening.

However, if digital whispers are followed to the point of maximum written conflict, then Josh Griffith, who was recently elevated to co-executive producer and head writer, will usher Kerry out in a full-force way. Inventing a past that won’t exist until now (yes, each of those words were intended), Kerry could be shown in a flashback sequence as the person who rescued Mr. Hellstrom from the grave the ‘Coverup Crew’ created.

Young And The Restless – Was Kerry Katie’s Invisible Friend?

Johnson’s likable alter ego, who had clear potential to do more in GC, may also be the mysterious and still unidentified individual who was involved in surveying the Newman Ranch. Maybe she was also Katie’s (Sienna Mercuri) friend, having worn some type of disguise?

While not a major character, it would be more digestible to have someone who’s been living among Y&R’s masses linked to J.T.’s comeback. Injecting a retro villain, who hasn’t been seen in awhile, or some new character just wouldn’t be as intriguing.

Will Kerry return someday after her hiatus period and be able to reestablish a romantic connection with the man she apparently loves? That potential will soon be known, as will the presumed tie-in to the unfolding J.T. storyline.