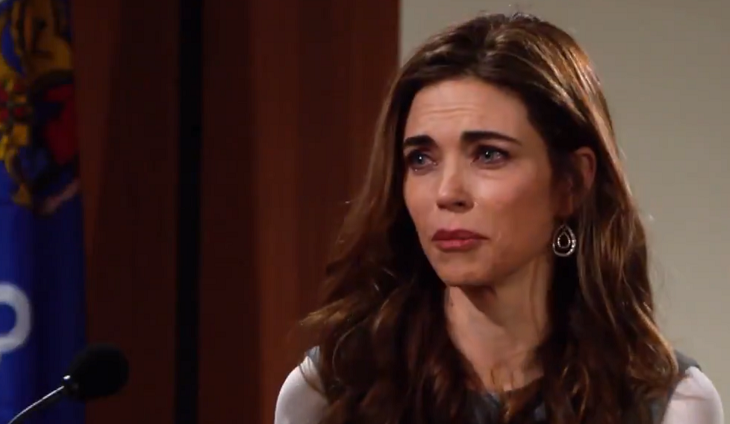 Michael (Christian Le Blanc) finally had to do it on the Young and the Restless (Y&R). He agreed with Vickie’s (Amelia Heinle) professed belief that she needed to take the stand and tell her painful story. The resulting, heartbreaking testimony then shocked the courtroom, as anticipated. But will it save her from being imprisoned?

Y&R’s choice to explore the topics surrounding this case created the need to have a one-sided villain. Plucking Luckinbill’s long-gone character, as J.T. hadn’t been seen in Genoa City since 2010, before returning to town in late 2017, was bold.

For his part, Luckinbill deserves high praise for knowingly reprising a role that he played for over a decade, during his first long run on this iconic daytime show. The actor knew in advance that J.T.’s announced limited-run would end darkly, permanently altering fan perception of Mr. Hellstrom, as intended, for the projected greater good.

Luckinbill’s choice was gutsy, as was former executive producer and head writer Mal Young’s in leading the conceptualization, implementation, and delivery of this particular storyline. Intended as controversial in a social media age where critique was not just expected, but purposely used as a bullhorn to promote the show.

Heinle’s acting chops were particularly highlighted in recent years, when she managed to work with four different actors who played Billy (Billy Miller, David Tom, Burgess Jenkins, and currently, Jason Thompson) from 2014 through 2016. That remarkable presence has been furthered by her work within this arc, which includes the real life angle of Luckinbill being a recent, real life ex-husband.

Vickie’s range of emotions, as masterfully portrayed by Heinle, represent one of the many superior creative aspects of what became a fully encompassing storyline that enveloped numerous Genoa City residents and Y&R’s hardcore audience. Hopefully, despite her complicity in various incidents, the ever-resilient Victoria is able to avoid jail time due to her strong public statement.

Young And The Restless #YR Spoilers: Rey’s Job Is In Jeopardy- Will He Lose His Badge? @SoapOperaSpy https://t.co/qZnqbymBCW

Days Of Our Lives Spoilers: Jack Uses Tripp To Get To Haley