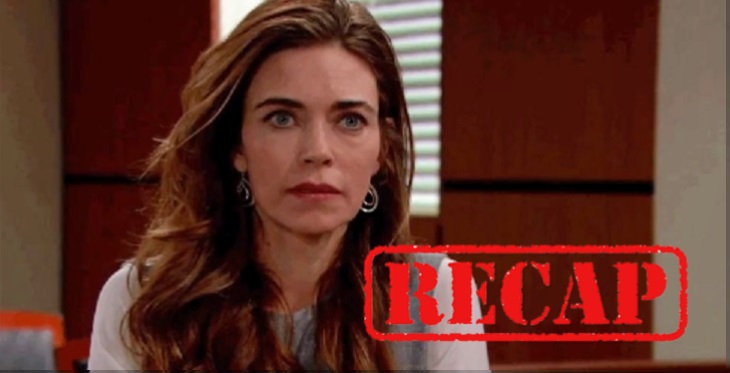 The Young and the Restless (Y&R) recap Friday, March 8, 2019 reveals that over in the courtroom, Victoria Newman’s (Amelia Heinle) on the stand. Michael Baldwin (Christian LeBlanc) asks her to tell the court about her relationship with J.T. Hellstrom (Thad Luckinbill).

Victoria recounts how J.T. showed up after splitting with Mackenzie Hellstrom (Kelly Kruger) and they moved in together. She remembers how he became abusive, both emotionally and physically. Michael submits notes from Victoria’s therapist and footage of J.T.’s violent behavior. Everyone cringes as they watches the video.

Michael has Victoria explain the encounter. She admits she hit him while trying to fight back but never any other time. Michael puts a spotlight on the emotional abuse next, and Victoria relays when she finally had enough, he refused to leave and that’s why he broke in that night. She admits she wasn’t honest with the police, or Michael, because she was afraid no one would believe how afraid they were that night.

They go over the girls’ night. Nick Newman (Joshua Morrow) scowls as Victoria remembers J.T.’s harsh words to her after she refused to reconcile. Victoria describes how it turned physical after she threatened to call the police. She testifies her mother acted spontaneously – she didn’t want J.T. to die, she just wanted her to live. Victoria explains Phyllis Summers (Gina Tognoni) convinced them to cover it up. Michael remarks on the irony of Phyllis getting immunity.

Young And The Restless – Christine Suggests They Killed J.T. For Revenge

Christine Williams (Lauralee Bell) cross-examines Victoria. She’s says she’s sorry for what she went through, but extracts that after the incident on the video, Victoria didn’t sustain injuries and they became engaged. She has Victoria confirm he never got physical again until the night Nikki Newman (Melody Thomas Scott) killed him. Victoria explains he continued to be emotionally abusive and controlling.

Young And The Restless Rumors: Battle for Jabot Has Kerry Losing Her Job and Jack

Christine suggests Victoria really broke up with him after discovering he was working for the GCPD investigating her father and recaps how they killed J.T. Hellstrom, covered it up, and buried him in the park. Michael Baldwin redirects. Victoria expresses the terror she felt when J.T. became violent and she feared she’d never see her children again.

She adds you can’t understand unless you’ve experienced it. Michael asks what she thinks would have happened if Nikki hadn’t intervened. Victoria says, “I’d be dead.” It’s stricken from the record, but the defense rests.

During a break, Brittany Hodges (Lauren Woodland) and Sharon Newman (Sharon Case) reflect on Victoria’s experience. Sharon can’t believe anyone could doubt her. Brittany feels she built a strong defense for Sharon, and didn’t want to risk Victoria undoing it. Sharon glances at Nikki Newman and Victoria eyeballing her and agrees.

Young And The Restless – Nick Still Believes J.T. Could Be Alive

Meanwhile, Billy Abbott (Jason Thompson) laments convincing Phyllis to attend the girls’ night and if she hadn’t been there, the women might have called 911. Nick still believes J.T. Hellstrom could be alive and it could save Victoria, his mom, and Sharon.

Proceedings resume with Christine Williams’ summation – the women buried J.T. like roadkill and were happy he was dead. She maintains Nikki murdered J.T. and Victoria and Sharon helped cover it up. Finding them not guilty would send a dangerous message – they are guilty of being judge, jury and executioner.

Brittany next states Sharon’s case – she was used by the other defendants and a police officer. Michael  is last. He reflects on the meaning of reasonable doubt before mocking the prosecution for painting his clients as malicious and J.T. as a victim. Nikki was only protecting her daughter, and if Victoria had no knowledge of what would happen, she can’t be a party to it. He concludes, “You must find the defendants not guilty.”

In their apartment, Rey Rosales (Jordi Vilasuso) denies to Mia Rosales (Noemi Gonzalez) that anything’s going on with Sharon – she’s the woman he wants. Mia feels that’s only because he can’t be with Sharon after arresting her for murder. She challenges him to say he’s not in love with Sharon, and he complains she’s never satisfied. Mia felt like an idiot in that courtroom and asks how does he expect her to forgive this.

Young And The Restless – Rey Mocks Mia For Acting Innocent

Rey reminds her about his brother and mocks her for acting like an innocent betrayed wife. He recounts how he went to Sharon’s after Mia called Arturo’s name. She asks if he had sex with her. He says never. He announces he can no longer live this lie – she’s right; he’s in love with Sharon. Rey adds they only hurt one another. Mia questions if this is payback and she always thought he was better than her. She cries he promised to fight for their marriage, and it was a lie, he says he tried.

Mia asks how he can do this to their child and pleads for another chance. Rey refuses and adds he will look after her and the baby. He clarifies this isn’t about his love for Sharon – Mia still has feelings for his brother and Rey can’t forget what she did to his sister. He leaves to visit Lola Rosales (Sasha Calle) as Mia sobs. And that’s a wrap. Don’t forget to check often with Soap Opera Spy for all your soap needs!

Young And The Restless Spoilers: Rey’s Job Is In Jeopardy – Will He Lose His Badge? https://t.co/WlrYwO8V1j pic.twitter.com/h0Aw2AdMhy

Bold And The Beautiful Recap For Friday, March 8: Taylor Agrees With Hope – Zoe Stunned By Selfie Of Flo At Wyatt’s Beach House