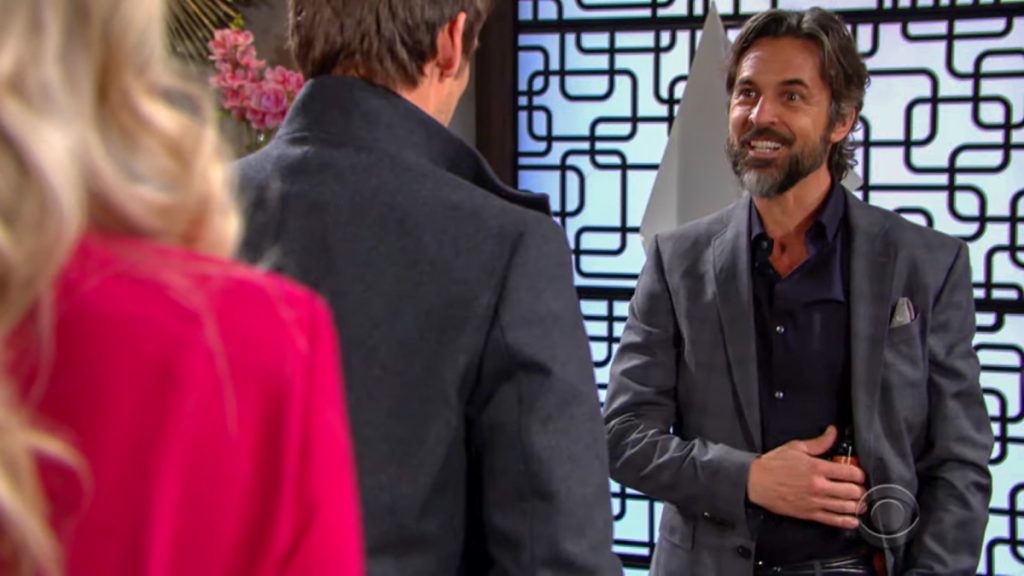 First, Ashley Abbott (Eileen Davidson) has returned to Genoa City from Paris, France where she runs her part of the family business. She has flown in to meet the newest member of the family, Theo Vanderway (Tyler Johnson) with whom she closely relates and empathizes with, having also been the result of one of her mother, and Theo’s grandmother, Dina Mergeron’s (Marla Adams) affairs.

At the Grand Phoenix, Adam Newman (Mark Grossman) and Chelsea Lawson (Melissa Claire Egan) watch in horror as their son, little Connor Newman runs away from them towards danger! Y & R viewers will recall that Simon Black (Jeffrey Vincent Parise) has been implying threats towards Connor to Chelsea, this is the reason why in Friday’s episode she wanted Adam to take him to the farm in Kansas where he grew up with his mother. She wanted Connor to be safe from Simon!

However, Adam and Connor showed up at the Grand Phoenix, and the implication is that Connor runs off straight into the waiting danger that is Simon and he holds him hostage! At Crimson Lights, Jack Abbott (Peter Bergman) and Nick Newman (Joshua Morrow) are shocked as Genoa City Police Chief Paul Williams (Doug Davidson), accompanied by Detective Rey Rosales (Jordi Vilasuso) inform them that there is an active hostage situation at The Grand Phoenix! Nick exclaims, “Abby and Chelsea are there!” Abby being of course, Abby Newman (Melissa Ordway) Nick’s younger sister.

Young & The Restless Spoilers – Simon Black Has Connor Newman – And A Gun!

Back at the Grand Phoenix, Simon has little Connor – and a gun! Abby runs towards them, crying, as she shouts, “You have to let him go!” Meanwhile, Chance Chancellor (Donny Boaz) who is in town not because of Katherine Chancellor’s (Jeanne Cooper) will, but because he is after Simon, is seen crawling through ductwork in the ceiling, probably in the room where all this is taking place! The will and his confrontation of Cane Ashby (Daniel Goddard) and Amanda Sinclair (Mishael Morgan) are only side issues.

He’s been trailing Simon for a while! Meanwhile, as Abby and Chelsea watch helplessly, Adam intervenes, standing between them and Simon. He tells Simon that he will have to shoot him before he would leave the hotel without his family! Simon taunts him, pulling his gun out as he warns Adam, “So you want to play hero? Ok!” Then, as Chelsea grabs Connor, Simon points his gun at Adam’s heart area in close range! Abby then screams as a gunshot is heard! Can Chance get a shot at Simon before Simon gets a shot at Adam?