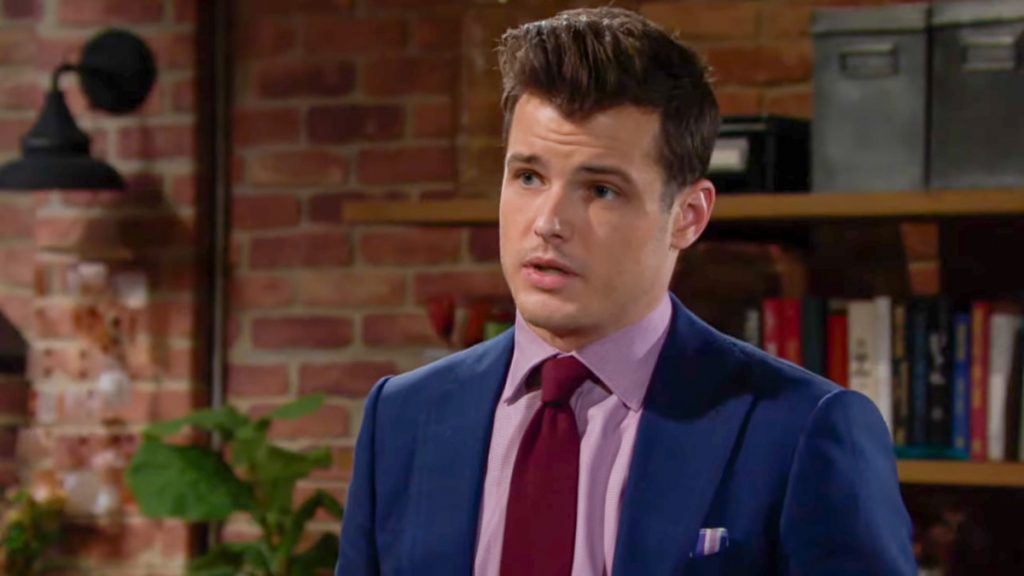 The Young and the Restless spoilers document that Kyle Abbott (Michael Mealor) continues to live in the past, choosing to believe that Theo Vanderway (Tyler Johnson) is who he was when they knew each other in New York.

The news that Theo is Dina Mergeron’s (Marla Adams) biological grandson, through Stuart Brooks (Robert Colbert), naturally stunned the Abbott family, most especially Kyle. Johnson’s character has played it mostly cool since then, following his initial mental jab where he called Kyle cuz at Crimson Lights.

In addition to territorial clan issues, Kyle fears his wife’s soft-hearted nature. He knows that Theo has the ability to create marital trouble for him and sees no way to avoid the current dilemma.

There’s no reasonable doubt about Kyle’s assessment being accurate. Theo has been a troublemaker during the years that he’s known him. His arrival in Genoa City, Wisconsin, wasn’t one that Kyle welcomed as he wanted to keep the NY years buried.

As Y&R viewers recall, the character Mealor began playing in 2018 was written off-screen in 2015, when Lachlan Buchanan (Kyle) was said to have gone to work for one of Jabot’s alternate locations.

Kyle was enraged that Theo located and then intentionally brought Zoe Hardisty (Anna Grace Barlow) to town and crashed the Kola wedding. Theo’s intent to reveal what he and Kyle did to Zoe didn’t derail the nuptials and later backfired when she spiked the punch bowl at the opening of The Grand Phoenix.

Lola loves Kyle. He has no reason to worry about her running to Theo anytime soon.

However, just as Summer Newman (Hunter King) formed and retains a part of Kyle’s heart, it’s possible that Lola and Theo’s friendship could deepen as the future plays out. Yet, that wouldn’t necessarily lead to anything romantic.

Theo is with Summer right now. But he’s slipped a few times, admitting that he would have wanted Lola to be more than a friend if they’d met in the past. There was and remains no reciprocation on Lola’s behalf.

The game has changed through Theo’s family tie. So instead of Kyle simply disliking an old friend, he’s rejecting a member of his grandmother and father’s family. Lola deeply values family, with Kyle needing to realize that link to the Theo situation and his wife’s view of it.

If Kyle is right, Theo will repeat past mistakes. So, the best course of action Kyle could take in that projected future would be for him to allow his loved ones, including his father, Jack Abbott (Peter Bergman) to form their own conclusions about cousin Theo.

But if Kyle is wrong, or even mostly so, then Theo will only appear to be, or actually become a sympathetic figure. Kyle risks being the jerk in that scenario if he treats him harshly.

It’s fair to say that the family reveal can change Theo’s behavior moving forward. Who he becomes is up to him. Everyone who Kyle cares about will be able to see reality, without him needing to shape their perceptions.