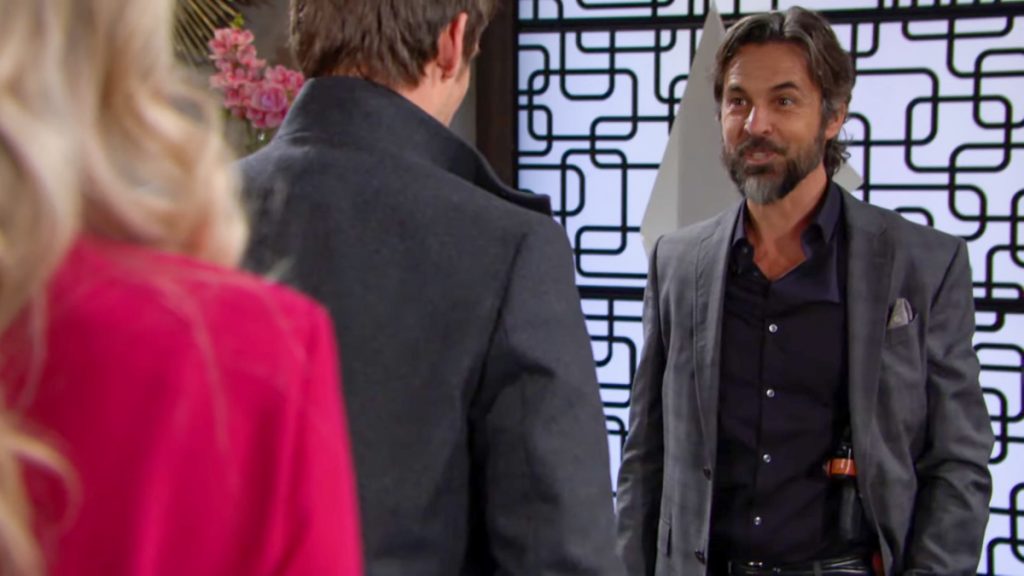 The Young and the Restless (Y&R) spoilers for Monday, November 11, tease that Adam Newman (Mark Grossman) will pay Victor Newman (Eric Braeden) a visit. At the ranch, Adam fills Victor in on his upcoming trip to the farm with Connor Newman (Judah Mackey). He mentions it was Chelsea Newman’s (Melissa Claire Egan) idea and hopes for Victor’s approval since Vic owns it.

Victor agrees the trip is a nice idea and goes to get his pocketknife. He lets Connor know he can carve his initials in the elm tree there. Connor wants Chelsea to take the trip with them, but Adam doesn’t think she can make it. However, he assures Connor they’ll stop by and talk to Chelsea about it before they leave.

At the Grand Phoenix, Phillip “Chance” Chancellor IV (Donny Boaz) will rip into Cane Ashby (Daniel Goddard) for bilking Devon Hamilton (Bryton James) out of his billions. Cane denies it, but he does end up admitting Jill Abbott’s (Jess Walton) suspicions about Colin Atkinson (Tristan Rogers). When asked about why he was off the grid, Chance admits he’s working on a case. He expects to wrap up his mission soon, which viewers ultimately learn is a sting operation involving Simon Black (Jeffrey Parise). 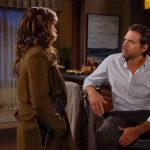 Chance looks at a text about the subject entering the building. He wants the other agent to watch Simon and suggests they’ll grab him when he exits. Meanwhile, Nikki Newman (Melody Thomas Scott) urges Nick Newman (Joshua Morrow) to speak with Victor. She wants Nick to give his father updates on his political campaign, so Nick agrees.

Over with Chelsea Newman (Melissa Claire Egan), she’s on edge as she chats with Abby Newman (Melissa Ordway). Abby guesses Chelsea can’t focus because of Simon and notes how uneasy she’s been since this guest’s arrival. Afterward, Chelsea calls Anita Lawson (Catherine Bach) to ask for the $1 million back. Chelsea reveals that she’s in danger along with Connor.

Back with Nick, he’s approached by Simon in the lounge. Simon mentions knowing about Nick’s campaign from the news and hopes he’s got a good woman backing him up. As for Chelsea, she freaks when Adam shows up with Connor. Chelsea tries to shuffle them right back out, but Adam wants to know what’s going on. He sends Connor to sit down so he can pry the truth out of Chelsea.

Simon waltzes over, so Adam does his best to get rid of him. Unfortunately, Simon spots the agent working with Chance and realizes he’s armed. Simon pulls out his own weapon and wants the guests to leave. He insists only Chelsea, Connor and Abby should stay in the building. Adam argues that Simon will have to shoot him if he expects him to leave the hotel without his family.

Over with Abby again, she gets all the other guests out and gazes at the panic button. Up in the suite, Amanda Sinclair (Mishael Morgan) walks in with Phyllis Summers (Michelle Stafford). Phyllis clarifies that it’s Chance, who assumes Amanda is his lawyer – the one he’s never even met. Chance is eventually ushered off to Phyllis’ room, where she set up the surveillance equipment.

At home, Victor welcomes Nick and discusses his councilman run with him. He questions if Nick’s ashamed of the Newman name, but Nick promises that’s not it. This is just Nick’s chance to stand on his own. Just before Nick departs, he learns Chelsea suggested Adam and Connor’s farm trip. Nick calls Chelsea and leaves a message in hopes of talking soon.

As for Simon, he blames Chelsea for the hostage situation that’s unfolding. Simon intends to get his money and leave Genoa City, but he has to find a way to resolve this first. The Young and the Restless spoilers say some suspenseful moments are coming up. We’ll keep you posted as other Y&R details and rumors emerge. Stay tuned to see what’s next on the CBS soap.