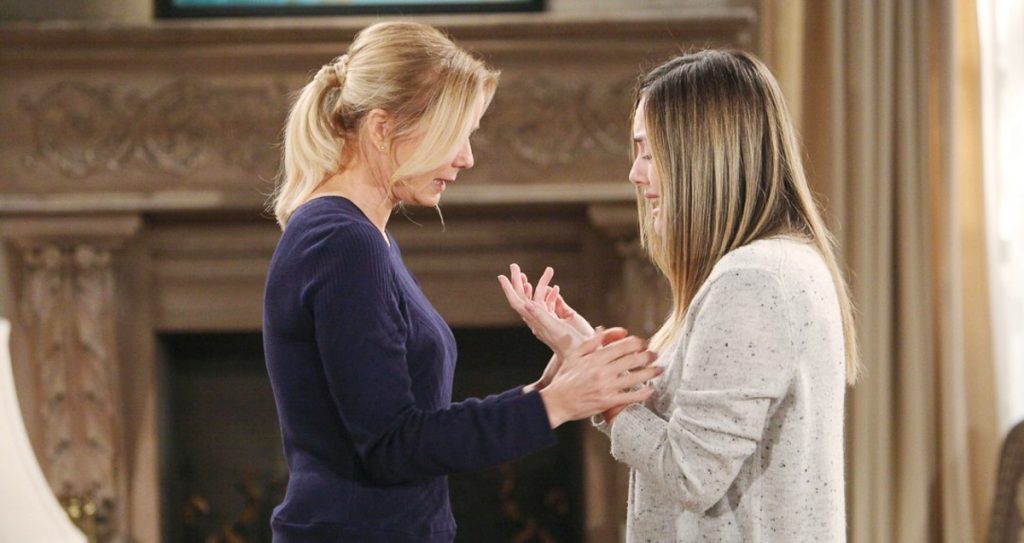 The Bold and the Beautiful promo for the week of November 11th thru 15th indicate that Hope Logan’s (Annika Noelle) guilt will weigh heavily on her following Thomas Forrester’s (Matthew Atkinson) fall.

Hope had been on a mission to gain custody of Douglas Forrester (Henry Joseph Samiri). She formed a plan to seduce Thomas in hopes of getting him to sign over custody of the boy. Thomas signed the papers, however Hope’s plan would go awry. Thomas believing that Hope was sincere in wanting to be a family together, wanted to celebrate.

Hope refused his advances and when he wouldn’t tell her Douglas’ whereabouts, she began frantically running around Forrester Creations searching for him. Thomas chased after her and the two ended up on the stairs above vats of hydrofluoric acid. As Thomas tried to kiss Hope, she pushed him, sending him over the railing and into one of the vats.

B&B Spoilers – What With The Aftermath Be

After the accident, a frantic Hope goes searching for Thomas, but can’t find his body. Hope comes to the realization that she killed Thomas and everyone will think she planned his murder.

While Hope will become Douglas’ mother, she had to deal with questions from Ridge Forrester (Thorsten Kaye). In a clip from the promo, Ridge is seen confronting Hope by claiming he knows what she did. Odds are he won’t discover his son’s death so soon, and he’s confronting Hope over manipulating Thomas into giving up custody.

Yet, the more she tries to keep it a secret, the more her guilt increases. It’s only a matter of the time before the truth is discovered and Hope will confess what she did.

After the incident at Forrester Creations, Hope goes home and tells her mother Brooke Logan (Katherine Kelly Lang) what happened. Brooke reassures her daughter it wasn’t her fault and she acted in self defense because Thomas came after her. Brooke hasn’t been shy about voicing her opinion about Thomas being dangerous. With Thomas dead and Hope responsible, she’s going to do whatever it takes to protect her daughter and keep this secret. Yet, her taking part in the cover up will ruin her relationship with Ridge.

The biggest question coming out of this storyline is the fate of Thomas. Viewers saw him fall into the acid and it’s believed he didn’t survive. But as fans know, soap characters don’t stay dead.

Tension between Brooke, Ridge, Hope, and Thomas was at an all time high before the incident. Things will become more tense when the truth does come out. When and if Thomas does return, Hope and Brooke will feel his wrath.