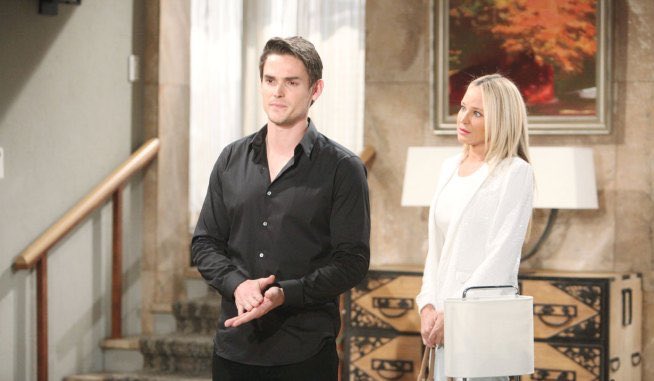 The Young and the Restless spoilers for Wednesday, September 25, tease that Victoria Newman (Amelia Heinle) and Nikki Newman (Melody Thomas Scott) will quietly discuss their scheme against Adam Newman (Mark Grossman) at The Grand Phoenix.

It will turn out that Abby Newman (Melissa Ordway) has been in on the scheme, too. Nikki will remark that Victor Newman (Eric Braeden) is very upset about Victoria getting dragged into this, but that he still hasn’t given up on Adam.

Young & The Restless Spoilers – Billy Abbott Goes Back To Therapy

Meanwhile, Billy Abbott (Jason Thompson) will meet with his therapist, Dr. Clay (Sandra Thigpen). He’ll tell her that he came back to therapy because he needs help and want to be healthy. He’ll disclose that he went somewhere dark and destructive, that he blacked out, and that it was like he was two different people, with one being the worst part of himself.

Next on Y&R, Sharon Newman (Sharon Case) will talk with Adam at his penthouse. She’ll want him to make things right by helping Victoria, and she’ll essentially offer herself to him, but he’ll press her to tell him that she loves him. Sharon will balk and hem-haw around, and Adam will think that if she can’t offer her whole self, then she should leave and not come back.

Next on Y&R, at Crimson Lights, Kevin Fisher (Greg Rikaart) and Chloe Mitchell (Elizabeth Hendrickson) will talk about the case of Victor’s death, and they’ll agree that Adam likely killed him. Kevin will hope that this case will finally bring Adam down. Talk will turn to their daughter and to Jill Abbott’s (Jess Walton) return. Kevin will think that Chloe deserves a medal for what she did to save Billy, and Chloe will remark that she’d like a more personal reward. Later, the two will be alone together after making love in a room at The Grand Phoenix, happy and content.

Next on Y&R, at Devon Hamilton’s (Bryton James) penthouse, he and Elena Dawson (Brytni Sarpy) will discuss her upcoming birthday party. She’ll suggest something intimate. As they discuss, the topic of Amanda Sinclair (Mishael Morgan) will come up, and Devon will mention that she looks just like Hilary Hamilton (Mishael Morgan). He’ll say that he doesn’t think that the fact that they could be twins is a coincidence and that someone is trying to rattle him. Devon will want to get to the bottom of what’s going on.

Later, Elena will talk with Nate Hastings (Sean Dominic) at Crimson Lights and she’ll share her thoughts on Amanda. Nate will say that he saw Amanda at The Grand Phoenix and they could indeed be twins. They’ll agree that something is going on here.

Young & The Restless Spoilers – The Ruse About Victor Newman Continues

Next on Y&R, at The Grand Phoenix, Devon will tell Abby that he’s sorry about Victor. Meanwhile, Jill will appear and offer condolences to Nikki about Victor in her own unique way. Billy will then arrive and talk with Jill about his psychological difficulties; she’ll be peeved that he didn’t confide in her. Billy will let her know that he’s getting help.

Devon and Jill will chat a bit about the Amanda situation, and Jill will say that she still hasn’t heard from Chance Chancellor (John Driscoll) and that she can’t believe he’s involved in this kind of con. Jill will ask Devon to send Amanda to her if she comes back.

Abby and Nate will also meet up at the hotel, and Abby will note that she doesn’t like lying to Devon about Victor’s death, and it will become clear that Summer Newman (Hunter King) doesn’t know about the scheme or that Victor’s alive. Meanwhile, Billy and Victoria will meet up and happily talk while Nikki and Jill watch from across the room.

General Hospital recap Tuesday September 24th: Sam, Dev, and Wiley are in danger! – Josslyn Thinks She Is Being Sent Away